Other than fish, there aren’t many good animal product sources of magnesium.

That’s why vegans don’t usually have much trouble getting magnesium. You were eating it before, and now you’re eating more of the foods that are good sources.

Additionally, magnesium is often added to foods that are fortified.

How Much Magnesium Do You Need?

The recommended daily allowance of magnesium ranges from 310-420 mg for adults (Source). 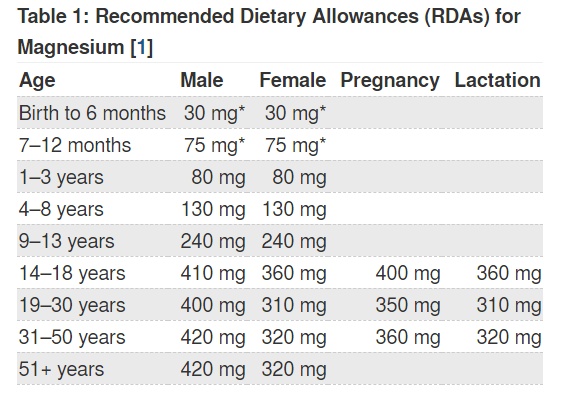 It’s possible to get your RDA in a single serving if you eat the right foods.

Magnesium deficiency isn’t very common, but when it does occur, it comes with symptoms like loss of appetite, fatigue, nausea, and muscle cramps.

If it does, a doctor may recommend a vegan magnesium supplement.

We’ll look at a few tables of the best sources with amounts of magnesium by weight and calories in a second.

A perfect food would have a lot of magnesium per serving, while not having too many calories, this would be the top-right corner of the chart below (click to enlarge): 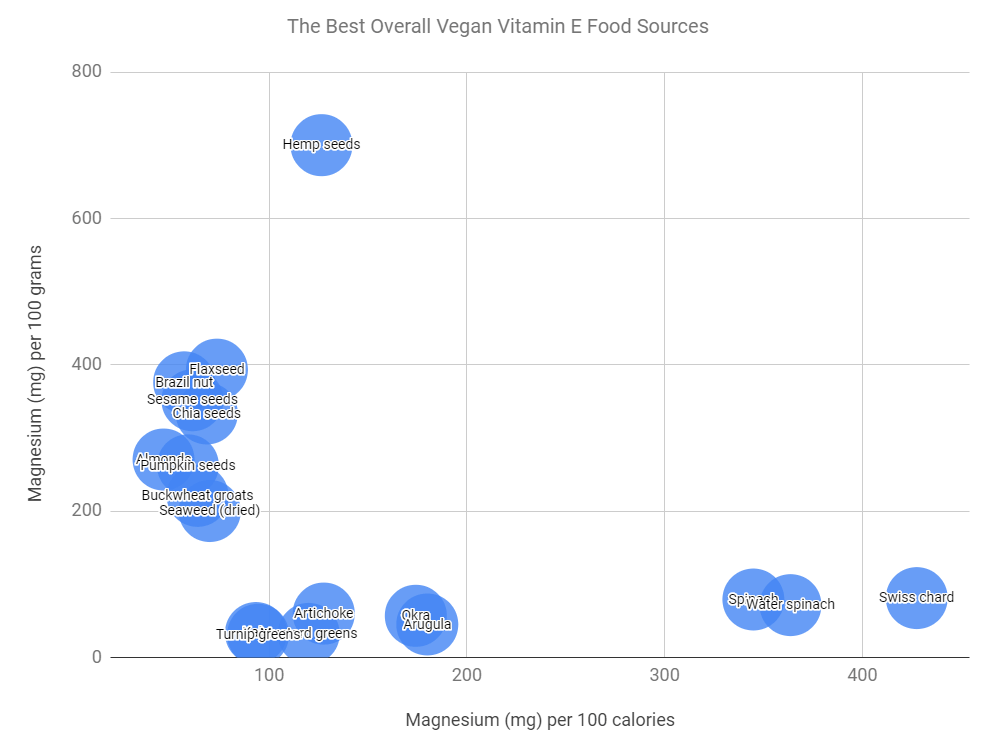 Magnesium is unique in that there really is no source that is both high in magnesium and low in calories.

You have 2 main groups:

The Best Vegan Sources of Magnesium Per 100 Grams

Using data from the USDA, I’ve compiled a list of the 30 best whole foods that you can eat to get magnesium.

It does not include processed and pre-packaged foods like cereals that may be fortified with magnesium.

Many adults can meet their RDA with a large serving of hemp or flax seeds.

The Best Vegan Sources of Magnesium Per 100 Calories

As we saw in the bubble chart, certain leafy greens have a good amount of magnesium, but you have to eat a ton of them.

That might be good if you’re trying to lose weight, but otherwise you probably want to stick to the foods in the above section.

Overall, most people don’t need to do anything special to reach their RDA of magnesium. But if you’re worried you’ve been missing some, include any of those top vegan magnesium food sources in your meals and you’ll easily reach your goals.

While you can plan your meals around specific foods, sometimes it’s easier to think in general terms of which food groups to focus on to get more magnesium.

From the tables, certain patterns emerged near the top.

Seeds are by far the best plant-based source of magnesium. Hemp, flax, chia, sesame, and pumpkin seeds were all right at the top of the list.

They are also a great source of protein, omega3 fats, and other minerals like iron. If anything is a “superfood,” seeds would win that title.

Most nuts are relatively high in magnesium. Brazil nuts are the best (also the best vegan source of selenium by far) of the nuts in terms of magnesium content, but almonds, cashews, pine nuts, and peanuts are all up there.

A few handful of nuts is enough to meet the magnesium RDA for adults, but also comes with quite a few calories.

Oats, buckwheat, and rye are all good sources of magnesium and multiple other minerals.

Most grains in general aren’t all that nutritious, but these are the exception. Of those 3, oats are the most accessible to most people, but now’s a good time to try rye bread if you haven’t before.

Most seeds and nuts can either be eaten by themselves or just thrown on salads, but in case you want to get a bit fancier, here’s a few vegan recipes that feature good sources of magnesium: