As an alternative, I’ve compiled my 9 favorite homemade vegan protein shake recipes. The first 4 have no protein powder, but the last 5 do.

Or you can also make homemade vegan protein powder. 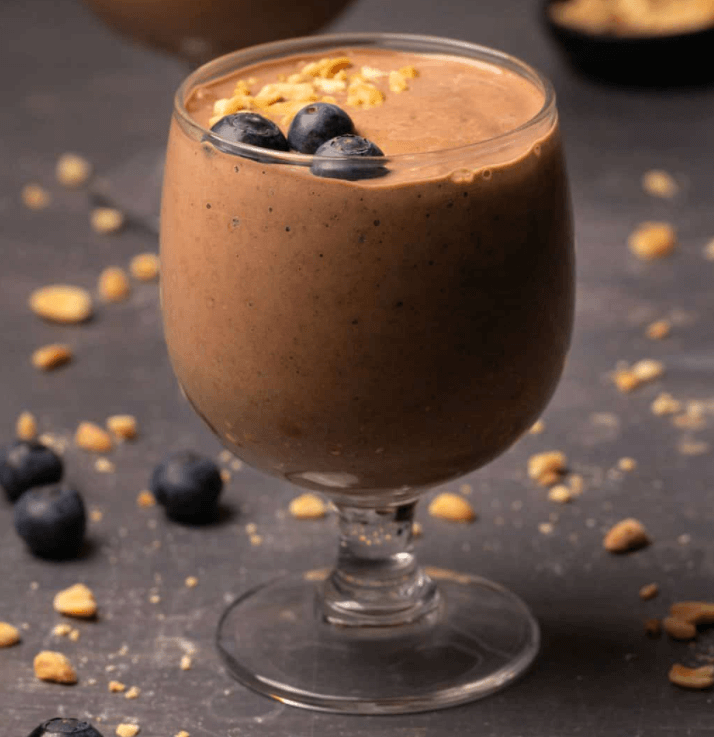 This is a healthy and easy to make smoothie that’s loaded in protein. It only has 7 ingredients:

When I make this one, I usually ease up on the oats to improve the macros further. Still, if you follow the recipe exactly, each shake has 20.3 grams of protein and 560 calories, good for a post-workout shake.

I regularly buy more bananas than I eat so that I can freeze them and throw them into shakes. Pro-tip: peel them before you freeze them. 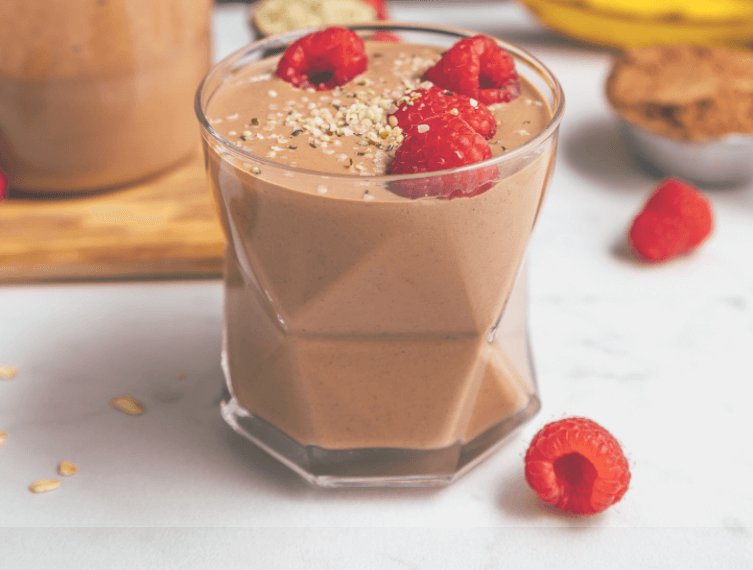 With 23.3 grams of protein and just over 600 calories, the macros for this shake are decent. They improve even more if you use soy milk instead of almond milk.

The main protein sources in this smoothie are:

Even though oats add a lot of carbohydrates, they still are one of the best whole grains in terms of protein quantity. 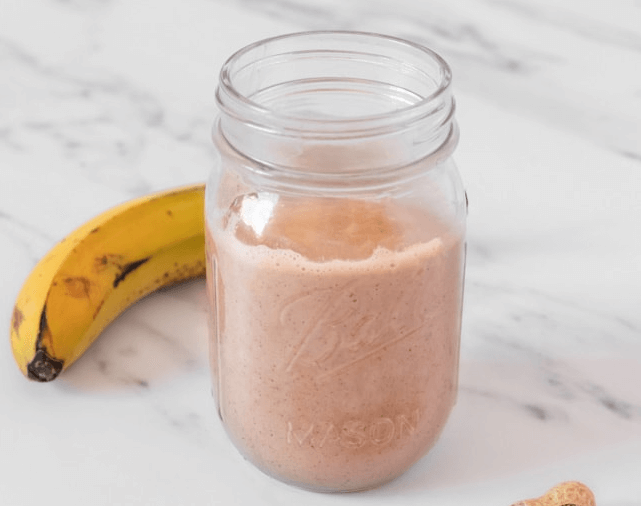 This is similar to the first shake, but a little bit simpler, so I make it if I’m running low on time.

Again, the main protein sources are:

You may have noticed a pattern by now. If you don’t want to use protein powder, soy milk and peanut butter are important ingredients. They are both among the best vegan sources of protein.

Soy milk is much higher in protein than other plant milks, and peanut butter adds not only a good amount of protein, but a great flavor to just about any shake. 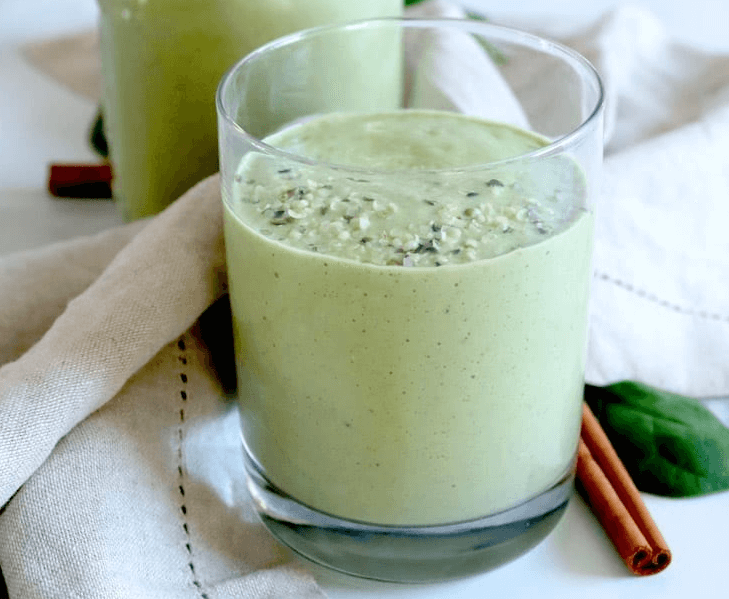 I wanted to include one protein shake recipe that didn’t have protein powder or peanut butter in it.

Apple cinnamon is my favorite flavor in just about anything, so it’s no wonder I like this smoothie. Be warned that there are quite a few ingredients, so you may need to plan ahead.

This recipe calls for:

It’s much closer to a traditional smoothie recipe that just so happens to have 19 grams of protein in a 474 calorie serving.

Aside from the soy milk and hemp seeds, both the spinach and avocado add a decent portion of the protein.

Note that this recipe contains many foods high in fructose, which can trigger excessive gas for some people. In that case, switch out the dates for a low fructose sweetener instead. 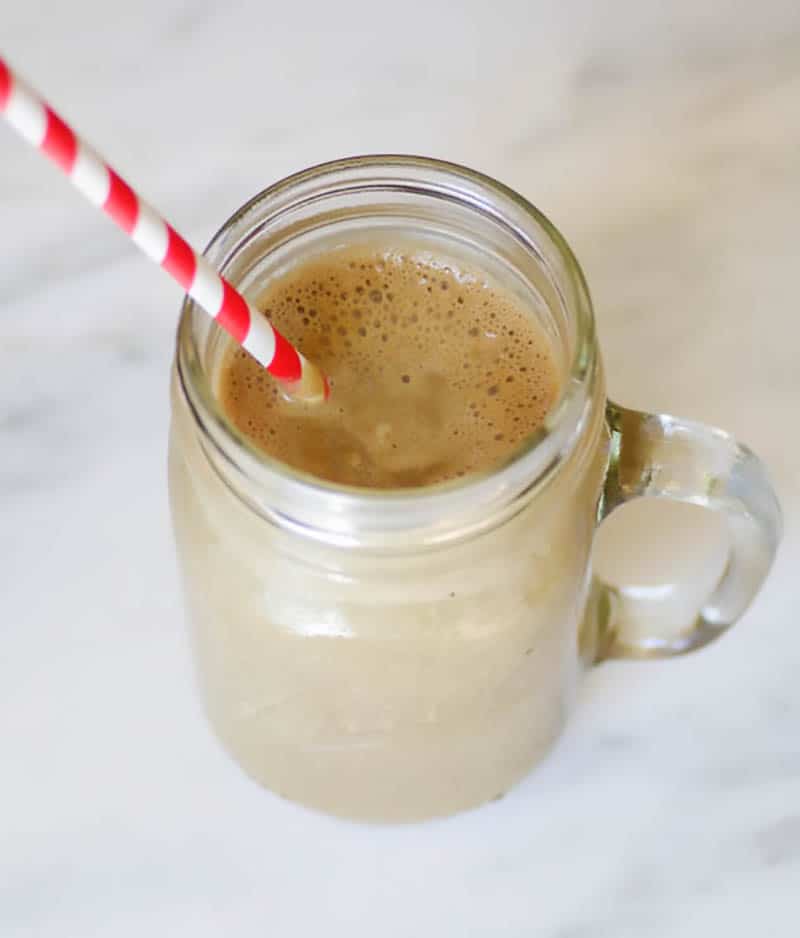 If you want to have a shake with great macros, there’s no way around the need for protein powder.

It also allows you to use a different plant-based milk than soy and still get a lot of protein.

Not only does it have a good amount of vitamins and omega 3 fats, but it has 17 grams of protein and only 225 calories in a serving. 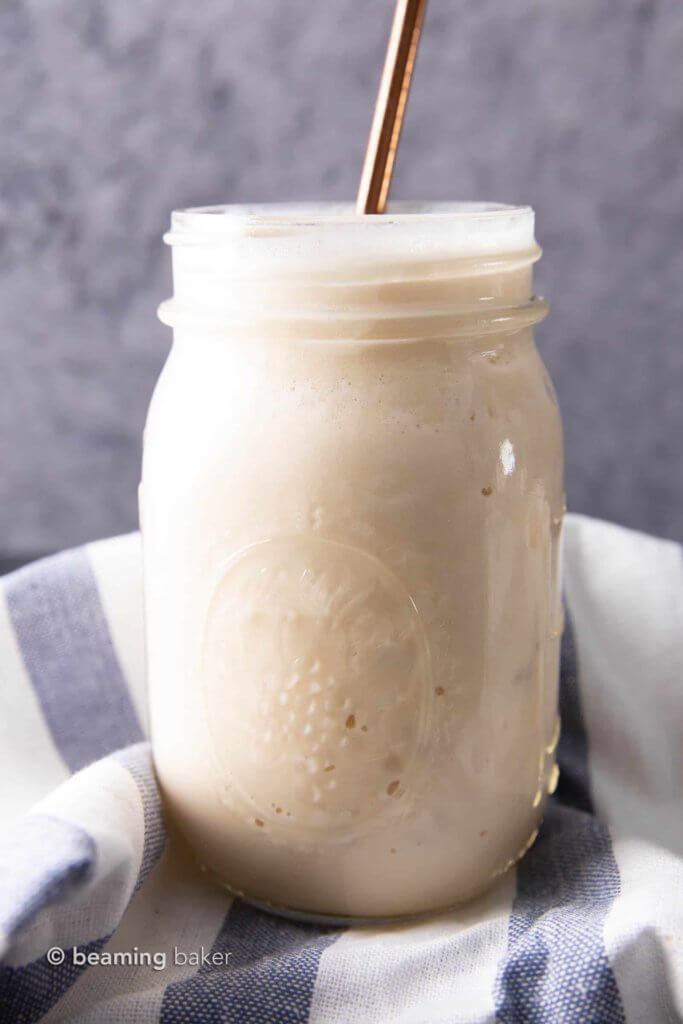 This recipe is dead simple and only has 4 main ingredients:

It adds a little more thickness and flavor to a basic protein shake, but still has great macros. There’s 22 grams of protein and 188 calories in a shake. 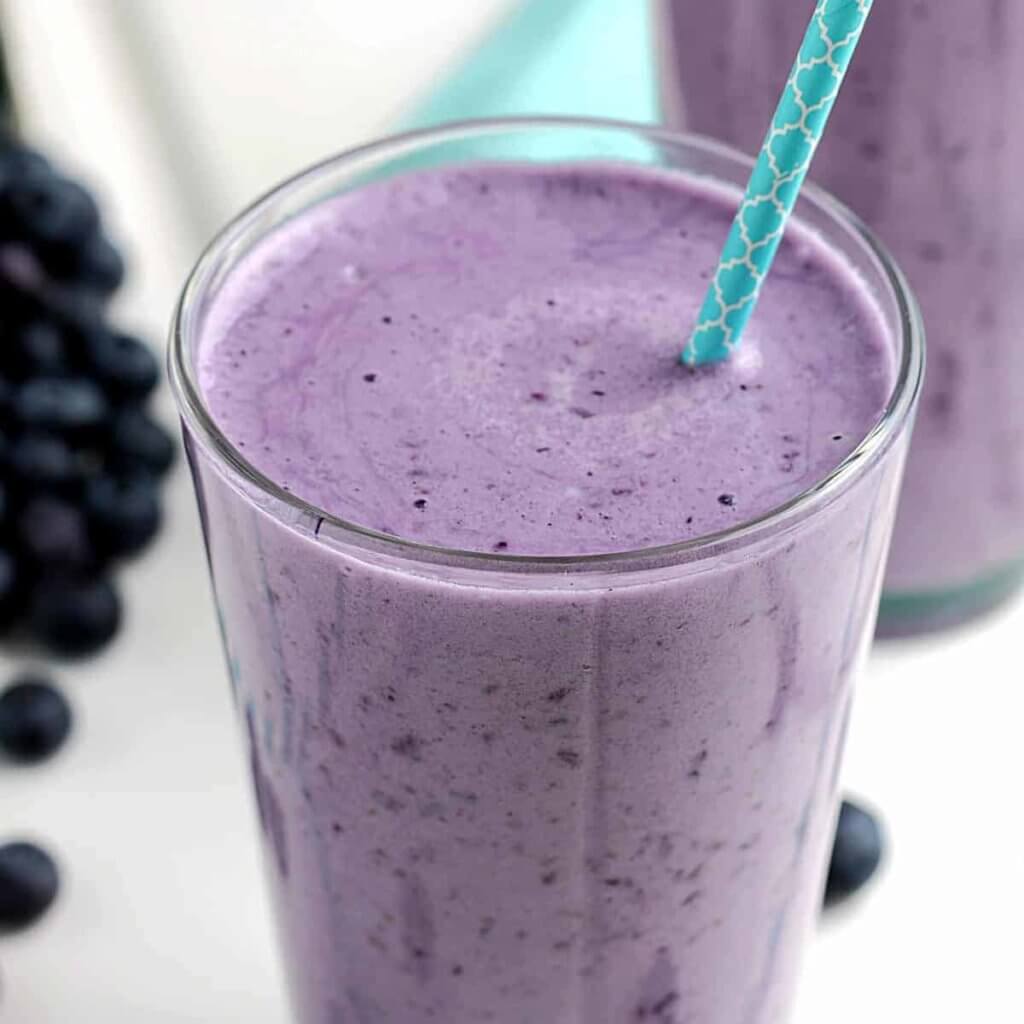 While the evidence shows that antioxidants don’t improve post-workout recovery as much as some people claim, blueberries are still good sources of nutrients and one of the best vegan sources of antioxidants. They taste great and certainly don’t hurt recovery.

This is a simple recipe that takes about a minute to throw together if you have frozen blueberries on hand. 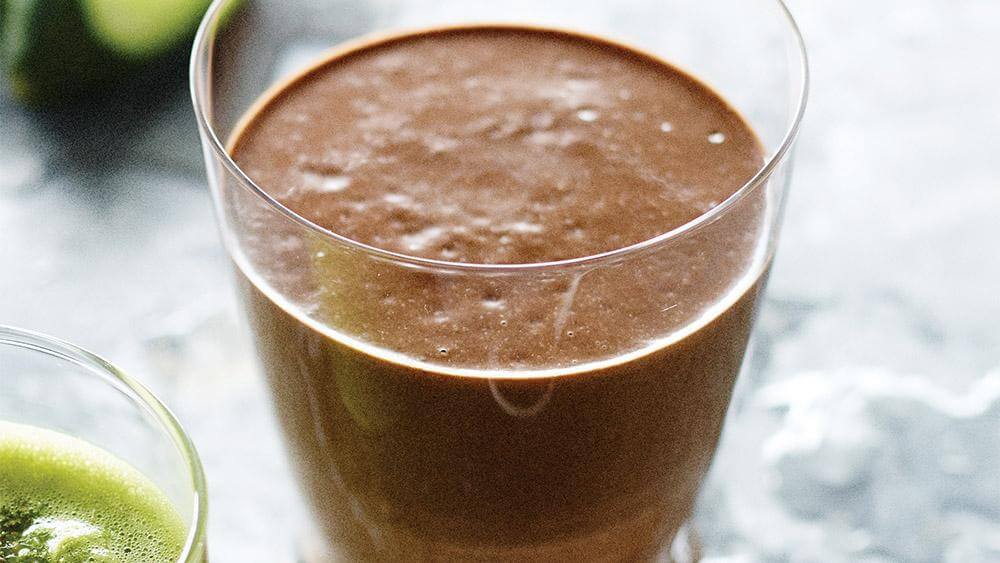 This is more of a meal replacement shake that happens to have a lot of protein rather than a standard protein shake.

It takes quite a bit of effort to make, but tastes great and is super healthy.

I won’t list all the ingredients here, but on top of standard ingredients like protein powder and almond milk, there’s also:

These are low calorie foods that have more protein than most people think.

There are also optional ingredients that you can omit if you don’t have the time or energy to go all out making this smoothie recipe.

Note that you need to drink this shake right away or the collard greens get…weird. 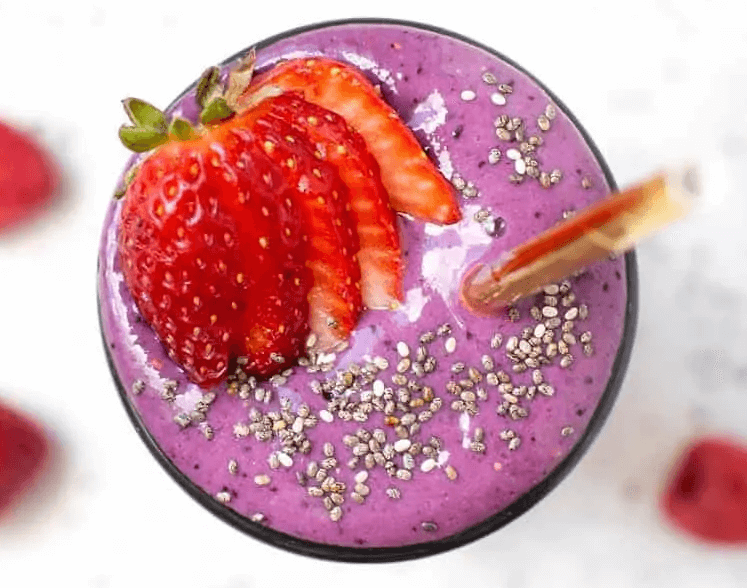 After all the vanilla and chocolate smoothie recipes on this list, let’s wrap it up with a high protein homemade triple berry option.

You can find a pre-made mix of frozen strawberries, raspberries, and blueberries in most stores to make this recipe easy.

Combining any vegan milk with protein powder, the berry mix, avocado, and cauliflower results in a great smoothie with 350 calories and 18 grams of protein.

The recipe calls for cauliflower rice, but that’s just cauliflower that’s been blended down, so you can add large cauliflower chunks to your blender as well.