Vitamin E is one of the more well-known antioxidants, which is a group of vitamins that are known to fight inflammation, heart disease, and even certain types of cancers.

Other than certain types of fish, all the best vitamin E sources are plants, so most people don’t struggle getting enough vitamin E.

I’ve created a few different tables of the best vegan vitamin E sources on this page.

How Much Vitamin E Do You Need?

The RDA for adults is 15 mg per day. That’s a minimum per day, and should be easy to get without special preparation. 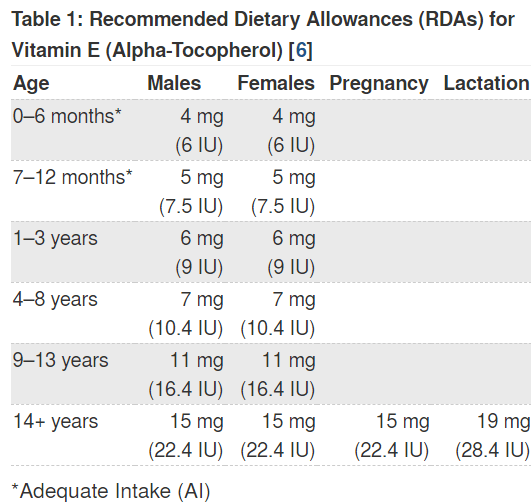 With that being said, vitamin E deficiency is very uncommon because it can be found in significant quantities in a variety of foods, as you’ll see shortly.

I’ve broken down the best ones per 100 calories and per serving below on this page, but here we’ll look at the ones that are highest in both categories.

We can do this with a simple bubble chart. Click on it to see a bigger version.

I understand it may be hard to see some, but what we’re looking for are the ones in the most upper-right quadrant.

It’s clear that 5 foods are the very best for vitamin E:

Then there’s a line of plant foods that separate them from that cluster in the lower left-hand corner. These are the second tier of the best vitamin E sources:

If you have trouble eating a high volume of foods, finding sources of vitamin E that have a lot per serving is a good idea.

After sorting my data by the amount of Vitamin E in a typical serving, here’s the top 30 foods:

Nuts in general are amazing for vitamin E. A 1/2 cup of almonds is almost the RDA by itself.

Vegetables like swiss chard and spinach are also high on the list, along with red bell peppers, parsnips, and eggplant.

Like I said earlier, vitamin E can be found in a diverse set of foods. There are multiple grains, beans, and fruits also on this list, covering every main whole food type.

For the table above, I defined a serving by what I felt was reasonable, which isn’t the most scientific way of going about this.

The “standard” way of comparing nutrients in food is to look at the amount per 100 grams, which is what we’ll do now to give you an alternative.

Seeds and nuts still dominate the list, they just have a lot of vitamin E.

The only downside is that they also have a lot of calories. But, you really don’t need to eat much of them to get your RDA, so it shouldn’t be that big of an issue.

I normalized the data I collected by calculating the vitamin E per 100 calories of each food, rather than per serving.

If you’re trying to lose weight but still want to make sure you’re getting enough vitamin E, stick to the top foods here:

Nuts still appear on the list, but close to the bottom because of how calorie dense they are.

In their place, the vegetables rise up further. All the same vegetables from the first list make an appearance near the top of this one.

To summarize, vitamin E isn’t particularly hard to get on any diet, even a vegan diet. A significant deficiency is rare, but you can avoid any risk (at least from your diet) by including any of the top vegan vitamin E sources I’ve listed in this post.

You can certainly eat nuts and seeds by themselves if you’d like, but you can also incorporate them into recipes.

Here are a few good recipes to get you started: