Wanting to show others that you can be fit while vegan isn’t silly at all.

Many myths about veganism (i.e. but where do you get your protein?) are commonly thought in places like gyms.

A shirt might spark a conversation that leads to a friend, or cause someone to rethink their position and do some research, you never know.

So while there aren’t too many companies that specifically make gym attire that advertise being vegan, you do have a few options.

With the growth of veganism, I wouldn’t be surprised if mainstream brands start making products for vegans in the future. They also make great gifts for vegan athletes.

No Meat Athlete was originally just a blog (a very popular one) about vegan fitness.

Now, it has its own store. There’s not a huge selection, but there are several items to choose from for both men and women, and the prices are pretty affordable.

They have moisture wicking shirts that you’ll be hard pressed to find elsewhere. They also sell standard tees and tights.

Most products sold in this store are polyester, and some blend in cotton as well.

Some of them are well suited for working out like tshirts, muscle tanks, and maybe even hoodies.

Most of the products are made from 100% organic cotton.

This is an online store that only sells clothing for women (at least for now).

There’s a very good selection, with modern styles similar to other big gym apparel brands (i.e. leggings up to your belly button – I’ve never understood this trend, but they sell them).

The one downside is there’s not much information on what the clothes are made of, and no review system. 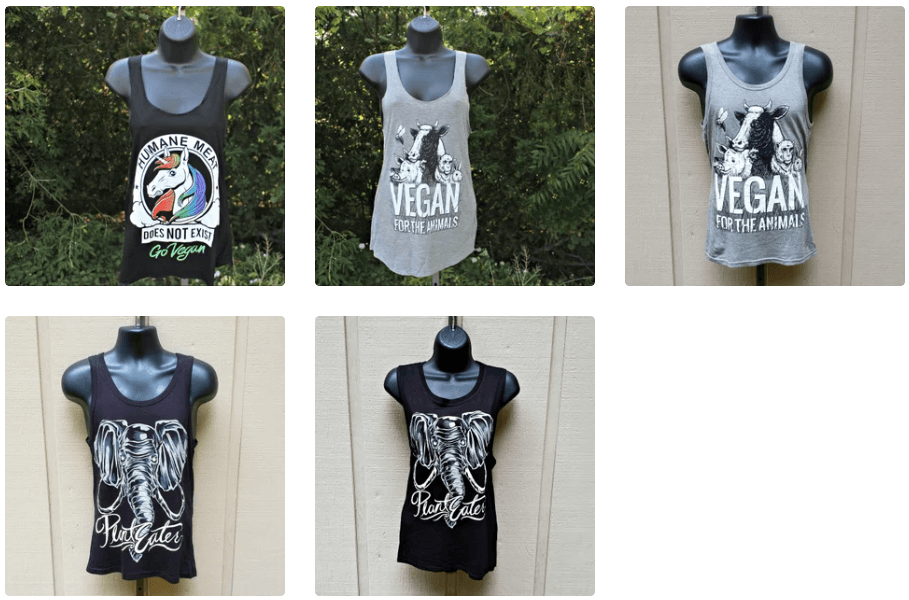 Compassion Co sells a variety of vegan clothing, and some of it is good for working out.

All their clothing is manufactured in the U.S., and is made from 100% organic cotton.

Hopefully you can find what you’re looking for from the above stores.

There will likely be more clothing brands catering to vegans in the future, and if I hear of any, I’ll add them to the list.