It’s not too hard to understand why vegans who oppose animal suffering don’t eat meat.

But why don’t think consume dairy products like milk, cheese, or yogurt?

It doesn’t seem like cows must suffer to produce these things when you first think about it. But, when you learn more about the dairy industry, it’s very clear that cows do indeed suffer to make these products.

There are 4 main ways that dairy cows suffer, I’ll summarize them all for you here.

Personally, any one of these would be enough for me to give up dairy. 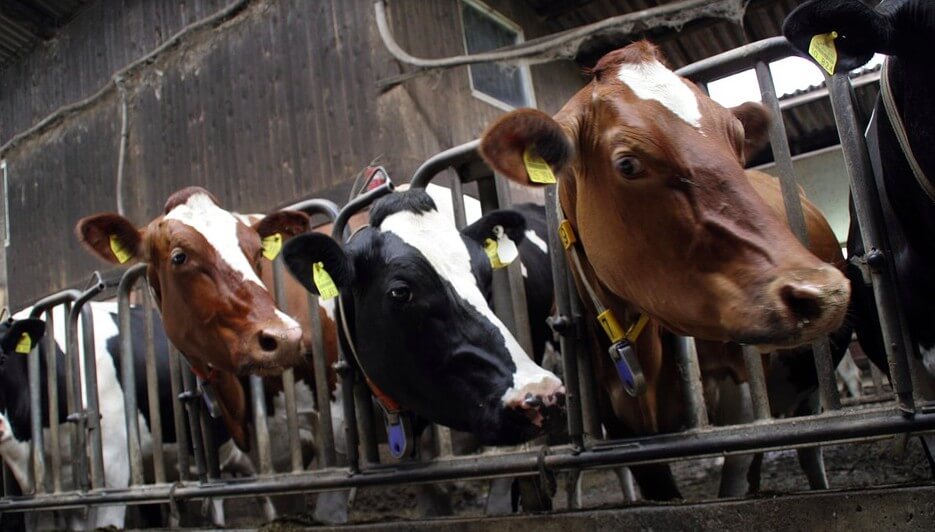 However, most milk comes from cows raised on large-scale factory farms.

Unless you’re buying milk from a local farm (that costs multiple times what the cheap stuff costs), your milk is coming from a factory farm.

These are not happy places for cows for multiple reasons:

In general, cows aren’t super happy about being milked either.

We’ve bred dairy cows to produce so much milk that it’s painful. Milking does relieve the pain, but because these cows are milked so often, they are at high risk for painful sores and diseases.

The first time I heard the idea of cows being “raped,” I kind of rolled my eyes and thought “that’s a bit of an exaggeration, isn’t it?”

But the more I thought about it, the more it bothered me.

In order for a cow to produce milk, it must be pregnant (it will continue to produce milk for a while after giving birth). No different than a human.

Dairy cows are constantly being artificially inseminated through an invasive process.

Can you imagine if someone did that to a woman? Think about someone locking a woman in a room, and constantly impregnated them giving them no choice in the matter.

What would you call the person doing that? A monster, among other things.

We know that cows are fairly intelligent creatures.

And yet dairy farmers are constantly raping them (yes, it is rape when you think about it) in order to get their milk.

It may not hit you at first, but the more you think about it in the back of your mind, it’ll bug you.

Pregnant Cows Give Birth: And Then What Happens?

So dairy cows are constantly pregnant, this means they have to give birth.

First, calves are taken away from their mothers within 24 hours in most cases, often immediately after birth.

Studies have shown that mother cows have strong bonds with their new calves. This leads to anxiety, frustration, and general emotional trauma.

Again, imagine taking a baby away from a human mother right after birth.

Moving on…what happens to those calves after?

A select few females will become dairy cows themselves, but only so many are needed.

The rest are sold off as veal calves. They’ll be raised for a short time, and then killed for veal.

Why are they not raised for beef? (I’m not sure that’s much better)

Dairy cows are very different from beef cows these days. Beef cows have been specifically bred to maximize the yield of meat, just like dairy cows produce the most milk.

It’s not profitable to raise a dairy cow’s calf for beef.

A cow can only be pregnant and produce optimal milk levels for so long.

Eventually, the cow gets sick from this process, or starts producing less milk.

Cows take space, food, and labor to raise, so there’s a constant evaluation of whether or not it’s profitable to keep a dairy cow.

Once it becomes unprofitable, which typically happens at 4-5 years old (note cows naturally live around 20 years, sometimes up to 25 years), cows are shipped off to slaughter.

This would be equivalent to killing someone that’s 20 years old, barely out of high school.

Cows being slaughtered is another potentially painful process.

Essentially, they live a life of mostly dull suffering, and then killed far before their natural lifespan.

See a “Good” Dairy Farm With Your Own Eyes

Even if you’re getting milk from a local farm where cows live a generally happy life, all of these things still apply. Those dairy cows are still:

And the excess calves are still killed shortly after birth if they can’t be raised as dairy cows.

At this point, I would recommend watching this tour of what I would consider a “good” dairy farm:

Hopefully you can understand now that dairy is never free of suffering, and why it is part of the reason that people go vegan.

And if you’re worried you can’t live without milk (i.e. dairy withdrawal), plant-based milks like almond and oat milk will make the transition easier. Other foods like coconut milk can be used as vegan substitutes for heavy cream.