Where to buy: Amazon

On my quest to find the best vegan protein bars, Whole Earth & Sea’s protein bar came up on Amazon with good ratings.

There’s only a single flavor, which makes it easy to rate.

Like all the other bars I’ve reviewed, this review is broken up into 3 main sections: protein, taste, and cost.

Nutrition and Protein Content of the Vegan Greens Bar

If a protein bar doesn’t have protein, what good is it?

That’s why the first main area I score out of 10 is protein content. In other words, what percentage of calories come from protein?

In each vegan greens bar there is:

15 grams of protein is pretty good, but 275 calories is on the high side, and 22 grams of sugar is quite high. That’s almost as much as a Snickers.

That’s not terrible, but it’s not great. Translating that into a score out of 10 (which considers the protein content of all the other bars), and it’s a 5 out of 10, which is actually below average (the average is 7).

The whole selling point of these bars is the “greens” part of the bar name.

It has a huge list of organic ingredients that includes greens like wheat grass powder and spirulina:

But that doesn’t really count for much to me.

It’s such a small amount added that it doesn’t give you much in the way of nutrition: 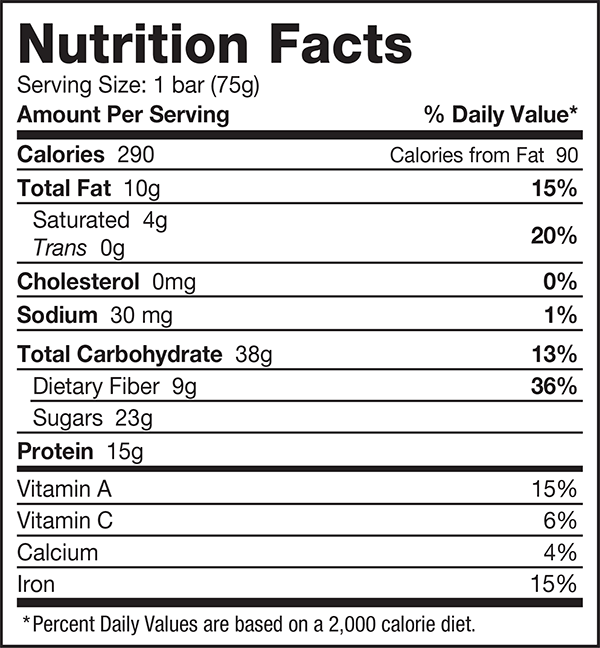 There’s a small amount of iron, calcium, vitamin A, and vitamin C, but nothing special. You’d be better off eating a few leaves of spinach.

There’s a reason why you can’t fully trust Amazon reviews.

At this point, almost all the reviews on Amazon are quite positive, many saying the bar tastes good.

It certainly looks good from the outside:

But once you crack it open, you reveal a soft green filling.

Here were my notes from the taste test:

Either those reviewers are lying, or they’re crazy.

I had multiple other people taste test this bar to make sure I wasn’t being too harsh, but they hated the taste more than I did.

It tastes about how you’d think a green filling would taste. If I had to describe the flavor, I’d go with a mix of spinach and peanut butter.

There are just so many other vegan protein bars that taste better (although some worse ones as well). I gave it a 4 out of 10 for taste.

Are the Bars on the Cheap or Expensive Side?

You’re looking at somewhere between $2-3 per bar in general when you buy a box.

Vegan Greens comes out to around $2.9 per bar, which is on the high side of that range.

Again, I used a simple formula to translate the cost per 10 grams of protein to a score out of 10 (higher is better/cheaper).

This vegan greens bar gets a cost score of 6 out of 10, once again slightly below average.

Overall, is This the Protein Bar for You?

I don’t hate this bar, it is edible if it’s your only option for some reason.

However, it’s not a good bar compared to the other options out there, it’s one of the worst overall.

It scores a 15/30 overall, which is just about a failing grade in any school.

If you’re looking for a better alternative, you’ll find many on my page dedicated to the best vegan protein bars.