A lot of Chinese food seems like it could be vegan friendly.

More often than not they are vegan-friendly, but it’s far from safe to make that assumption. 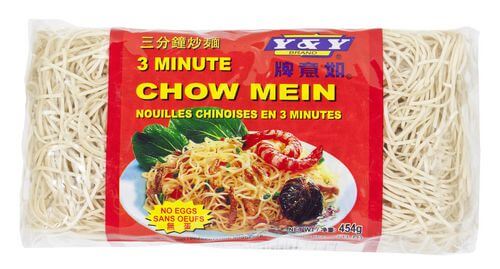 Most dry chow mein noodles are vegan, but some are borderline at best.

I highlighted the 2 types of ingredients that can be a concern for vegans.

Whether or not plain chow mein noodles are vegan will typically depend on how you view artificial colors and palm oil. These are both slightly controversial among vegans (if you’re a new vegan I wouldn’t worry about it until you’re more comfortable with the diet).

They are often tested on animals by researchers (not the food companies themselves), so it’s a grey area.

By most definitions, artificial colors are vegan-friendly, even though many vegans avoid them. It’s a personal choice you’ll have to make.

Oil in Chow Mein Noodles That Might Not Be Vegan (Palm)

While all cooking oil comes from plant sources, palm oil is controversial among vegans.

Many vegans don’t eat palm oil because the industry is responsible for a lot of animals suffering. You’ll have to decide for yourself.

Not all chow mein noodles contain palm oil, but I’d say about a third of them do.

Most chow mein noodles contain some oil, and most of them are clearly vegan. However, some contain palm oil, which is another grey area for vegans that you will have to decide where you stand on it.

The more common issue with chow mein noodles is the sauce.

None of these are vegan-friendly.

If you go out to a restaurant, you’ll need to ask about the ingredients in the chow mein noodles and their sauce.

Here’s a vegan chow mein recipe that I recommend.