Most supplements come in pill form, but not everyone can tolerate them, whether because they taste bad, or they’re hard to swallow.

That leaves 2 alternatives: gummies or liquids.

Gummies are great, but hard to find, and often have sugar added to them. Liquid supplements are relatively good tasting, and easier to find.

I’ve reviewed many vegan liquid multivitamins, and narrowed them down to the best 4. They’re all good options, but the best for you will depend on personal preferences, budget, and any specific needs.

Be aware that liquid multivitamins cost more and typically aren’t quite as good quality as capsules.

A Refresher on Vegan Multivitamins

If you’re not quite sure what you should be looking for, see my main post on the best vegan multivitamin supplements.

In short, research has found that vegans are more likely to be lacking or deficient in:

Women need even more iron than men (because of menstruation), so vegan women are even more likely to be deficient in iron.

On the other hand, vegans typically get much more than is needed of the other vitamins and minerals (not a bad thing within reason).

The big problem currently with liquid multivitamins is that none of them are made specifically for vegans. Well, technically one of them is, but it could have been done better.

So while they have some of the nutrients that most vegans would benefit from, they also have a ton of vitamins and minerals that vegans typically already get a ton of. In most cases this isn’t bad, but it doesn’t help either.

I’ll go into a bit more detail on the pros and cons of each below. 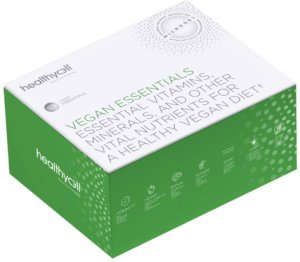 It’s the only liquid multivitamin that I could find that’s vegan and has iron (although not very much).

The big downside is the price. When you compare it with the other products on this list per serving, it’s relatively expensive.

If budget isn’t an issue, it’s likely the highest overall quality liquid multivitamin on this list.

Mary Ruth’s Morning Liquid multivitamin is a decent option if the first one isn’t available for some reason.

It has about 100% of the DV for most vitamins (again, not really needed for vegans other than B12 and D), and no minerals other than zinc.

There’s nothing particularly special about it, but it’s a “good” product from a reputable company.

This multivitamin contains at least 100% DV of all vitamins, plus a decent amount of most minerals…except iron.

Similar to Mary Ruth’s, it’s not a bad product, there’s just nothing that stands out about it for vegans in my opinion, plus it’s quite expensive per serving.