Metamucil is made to improve digestion and bowel movements, while also having a few other benefits like controlling your appetite.

This is due to the main ingredient in Metamucil: psyllium husk.

However, bloating and excess flatulence is a common side effect of Metamucil. In this short post, I’ll explain why this often occurs.

However, the main ingredient that can cause gas issues is psyllium husk, which is what we’ll mainly focus on here. Many powders also have a lot of sugar.

Aside from those, the other ingredients are typically just flavoring or coloring, which don’t really cause gas problems.

Here’s a snapshot of the nutrition facts and ingredient list of one such powder: 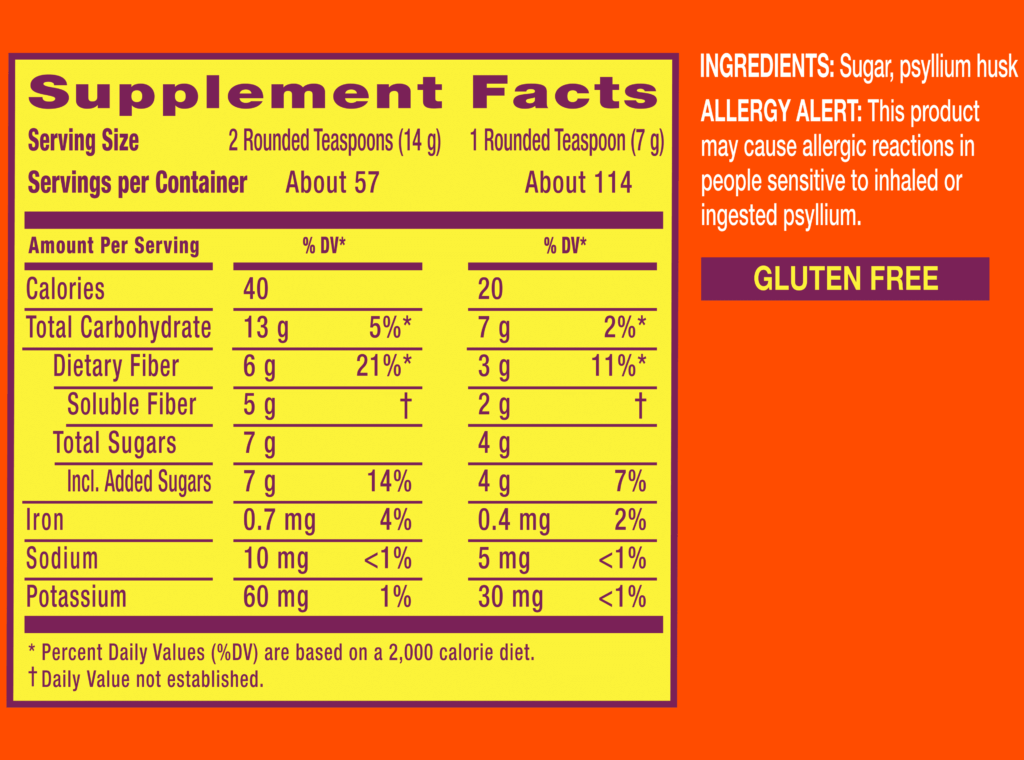 One important note to make is that psyllium husk is nearly all soluble fiber, this will be important shortly.

Some carbohydrates don’t break down well (or at all) in the stomach or small intestine. They pass into the large intestine, where they are fermented by bacteria, which produce gas as a byproduct.

This is typically a good thing, as you’re “feeding” good bacteria that are important for many aspects of good health.

However, this gas is released as flatulence, or causes bloating if it’s not released, so too much can be a problem.

Soluble fiber bulks up in the presence of water and forms a gel-like substance, which moves slower than insoluble fiber.

This is why even though both types of fiber can produce gas, soluble fiber typically causes more gas, because it’s fermented for a longer time period.

Now we can put those two parts together:

If someone has too much fiber at once, or just more than they’re used to, the extra bulk can act like an obstruction and trap gas in the intestines – leading to bloating.

How likely is Metamucil to cause a problem?

While it varies by product, there’s 3 grams of fiber in a teaspoon of Metamucil powder in my stores here in Canada.

The packaging recommends having up to 6 teaspoons per day, which would be 18 grams of fiber (mostly soluble).

To put this into context, adults should aim for at least 20-40 grams of fiber per day in total from all food sources.

If someone isn’t used to consuming much fiber and gets too enthusiastic about Metamucil, it’s easy to see how they would get enough to cause gas problems.

This is why the label suggests starting with a small serving per day and increasing slowly.

Some People Are Allergic to Psyllium Husk

I thought I would also quickly mention that while it’s rare, some people are actually allergic to psyllium husk.

Sometimes this results in stomach pain and bloating, while other times it results in symptoms like hives or swelling around the throat.

If you suspect this is an issue, see a doctor for next steps.

Can The Sugar in Metamucil Contribute to Gas Problems?

One final potential issue is the high amount of sugar in some Metamucil products.

In some products, maltodextrin (a simple sugar) is used, which is easily digested and shouldn’t cause gas issues.

However, when just “sugar” is on the ingredients list, that typically refers to sucrose, which is a 1:1 mixture of glucose and fructose.

Glucose is easily digested, but fructose is not and can cause gas in some people (particular those with IBS – source).

In addition, a small portion of people lack sucrase, the enzyme needed to break down sucrose, which leads to sucrose being fermented in the gut and producing gas.

Summary: Can Metamucil Cause Gas?

Let’s put this all together now.

First, gas and bloating are a result of excess fermentation of carbohydrates in the gut.

The soluble fiber in psyllium husk in Metamucil can cause gas and bloating as a side effect, especially when consumed in high amounts by people who are not used to it.

In addition, the sugar in certain Metamucil products could also contribute to gas problems, although it’s unlikely to be the primary concern.

In rare cases, allergies to psyllium husk or sugar intolerance is possible if all other potential causes of gas have been ruled out.