Nature’s Made currently makes 9 different B12 supplements. The main differences between them are in the dosage and type of supplement (e.g. softgel vs tablet).

Some of these are clearly not vegan, while others might be.

Unless you’re really set on getting a Nature’s Made product, it’s probably easier just to go to my review of the best vegan vitamin B12 supplements to find an alternative.

Regardless, let’s go through each product line.

Potential Non-Vegan Ingredients in Nature Made B-12 Supplements

Instead of repeating myself later, let’s just quickly go over the ingredients that some of the supplements that may come from an animal origin:

Are Nature’s Made Tablets Vegan?

There are 3 types of B12 tablets that Nature’s Made sells: standard tablets, extra strength tablets, and time release tablets.

These have almost the same ingredients to each other, but the time release have a couple extra.

Let’s look at the ingredients in the time release tablets to see if they are vegan or not:

While I’m not 100% sure (because of the stearic acid), all Nature’s Made tablets are likely vegan-friendly.

Are Nature’s Made Softgels or Gummies Vegan?

The soft gels are 100% NOT vegan. These contain not only gelatin (not vegan), but also beeswax. 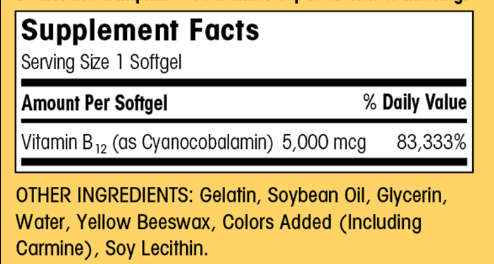 There’s also glycerin, which may or may not come from a plant, but it’s irrelevant at this point.

The gummies are also not vegan as they contain gelatin.

Are Nature’s Made Lozenges Vegan?

There are a few different doses of B12 available in lozenge form. These are probably vegan-friendly based on the ingredients list:

While I’m not 100% sure (because of the stearic acid), all Nature’s Made tablets are likely vegan-friendly.

Summary: Which Nature’s Made B12 Supplements Are Vegan?

I can’t guarantee it, but both the standard tablet and lozenge products are probably vegan-friendly.

Conversely, the softgels and gummies definitely are not suitable for vegans.

Keep in mind that companies can change their suppliers at any time (e.g. go from a vegan magnesium stearate to a non-vegan supplier), which is why I don’t like buying supplements that aren’t clearly labelled vegan.