Like all amino acids, it’s tougher to get enough of leucine on a vegan diet than one that includes animal products (e.g. chicken, beef, fish).

But it can be done, especially if you know which vegan foods contain the most of it.

That’s why I put together a collection of the 30 best vegan leucine-rich whole foods.

How Much Leucine Do You Need Per Day 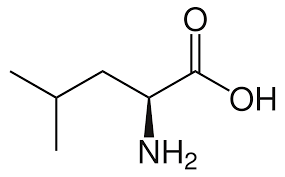 The minimum target for leucine is 42 mg per kg of bodyweight.

If you’re an athlete, you’re probably going to want to aim for even more. Leucine is often mentioned on fitness forums because it helps prevent muscle loss.

A leucine deficiency could lead to the following issues:

It’s not the most serious deficiency compared to some other nutrients, but it will have an effect.

If you’re not sure if you’re getting enough, track what you eat for a few days using a detailed food tracker like Cronometer.

I’ve created full lists of leucine sources per serving and per 100 calories later down on the page.

For now, I’d like to start by looking at the best of the best sources of leucine.

The absolute best sources should have a lot of leucine per 100 grams, and also per calorie. A bubble chart lets us understand this pretty easily.

The top sources should tend towards the top-right corner. Click the chart below to expand it.

Dried seaweed isn’t too useful because it’s really hard to eat 100 grams of it.

Unfortunately, those 2 foods perform so well on the chart that it’s hard to see the rest of the foods. Here’s a new chart with vital wheat gluten and dried seaweed removed.

That’s a lot clearer. In terms of leucine efficiency, it’s clear that certain foods stand out:

The Best Vegan Foods for Leucine Per 100 Grams

Another useful way to look at leucine sources is per 100 grams.

Here’s a list of the top 30 plant-based foods by weight:

Seeds and nuts round out most of the top 10 sources, suggesting that they’re a dense source of leucine if you’re not too concerned about calories.

The Top Vegan Leucine Food Sources Per Serving and Calorie

I came up with this list by using the food database that the USDA provides, and extracting the nutritional information for over 120 vegan whole foods.

The table below is the result when I sort by amount of leucine per typical serving. I’ve also included the amount per calorie if you’re watching your overall calorie intake.

If one thing is clear, it’s that legumes are a great way to get leucine on a vegan diet.

Other than oats and vital wheat gluten, every other food in the top 10 is a legume. Several types of beans, along with lentils and peanuts.

Most people, depending on their size, should aim to have at least one serving of any of them per day.

Another Way to Get Leucine: Vegan Leucine Supplements

Some people hate eating beans of any kind.

If that’s you, there are 2 options if you’re okay with getting leucine through supplements.

First, you can buy an l-leucine powder, but it’s hard to find a vegan version of these. There are some, but many are derived from duck feathers. 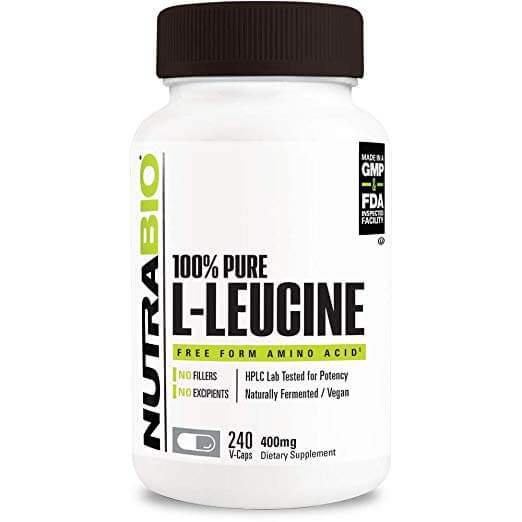 Another option is to find a good vegan protein powder that contains a high amount of leucine, some even have extra leucine added. That means a powder that is primarily made from soy, hemp, or peas, which are all relatively high in leucine as we saw above.

I’ve tried many vegan protein powders, but there’s one that I rank highly that also has added BCAAs – PlantFusion. 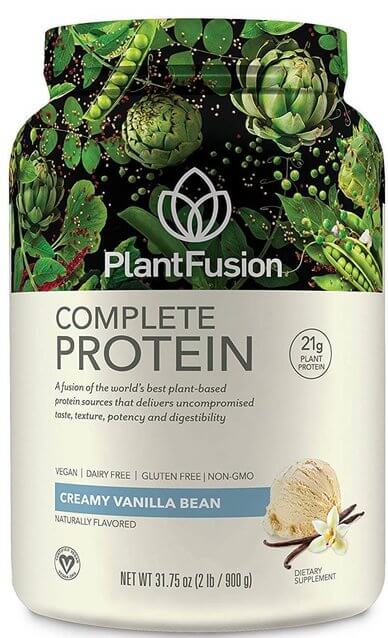 Why is PlantFusion the best here? Many reasons:

The foods you should mainly focus on are:

To help you get started with these if you’re not used to cooking and eating them, I’ve compiled 5 recipes that are high in leucine that contain these ingredients.

If you need more ideas, see my page of over 150 high protein vegan recipes. 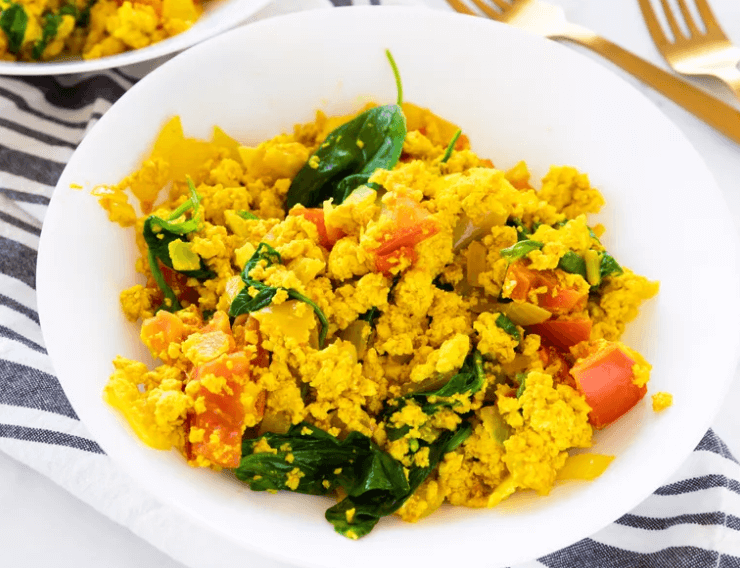 Tofu scramble is a great way to get protein in the morning while also filling any cravings for eggs.

This curried tofu recipe has both tofu and spinach, which gives it quite a bit of leucine and lysine. It’s one of the few tofu scrambles that I make on a regular basis. 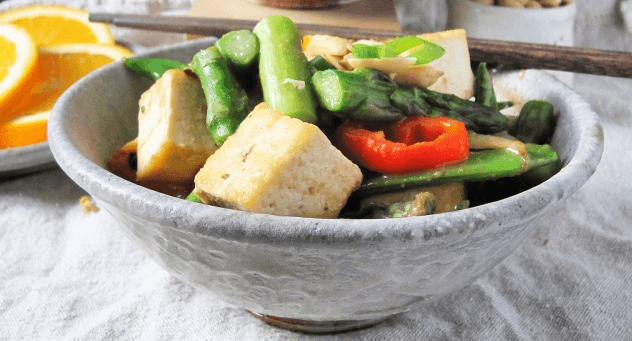 This is a relatively simple stir fry that’s packed with leucine. Like any stir fry, you can switch up the vegetables based on what you have available.

The most important ingredients are the tofu and peanut powder (you could substitute in peanut butter instead), which both have quite a bit of protein and leucine. 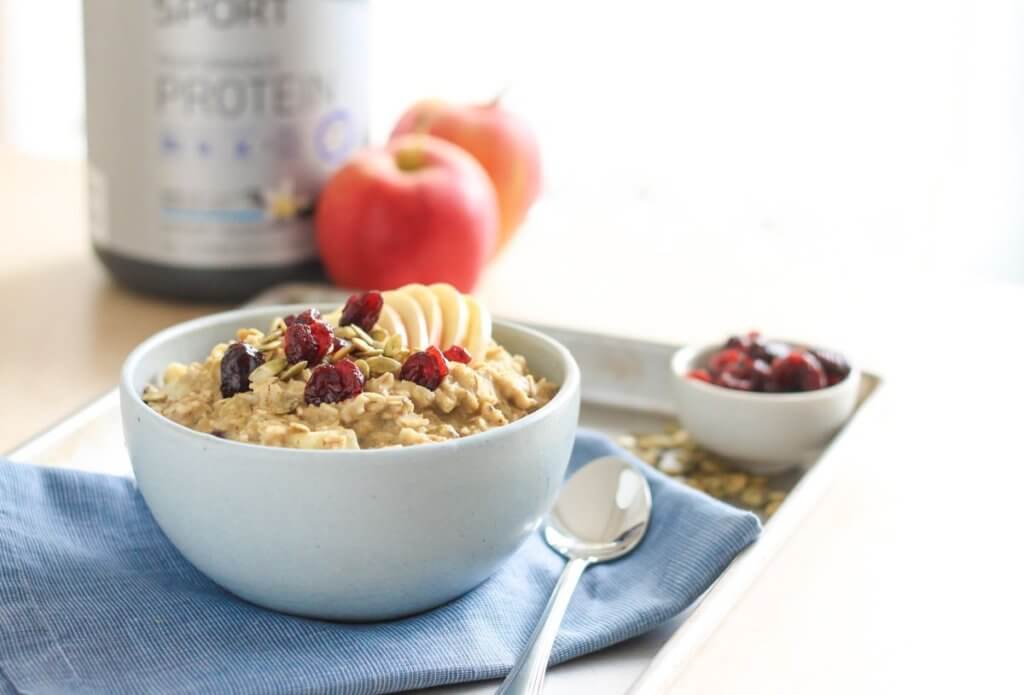 If you’re the type who finds oatmeal plain and boring, I’d suggest this recipe to spice things up.

Oats are a good source of leucine and lysine, so if you can find a way to enjoy them, it makes getting more of it into your diet a lot easier.

I realize it doesn’t look great from the picture, but I’ve made this myself and it tastes quite good.

More importantly, because of the lentils and spinach in it, it’s got a lot of leucine. 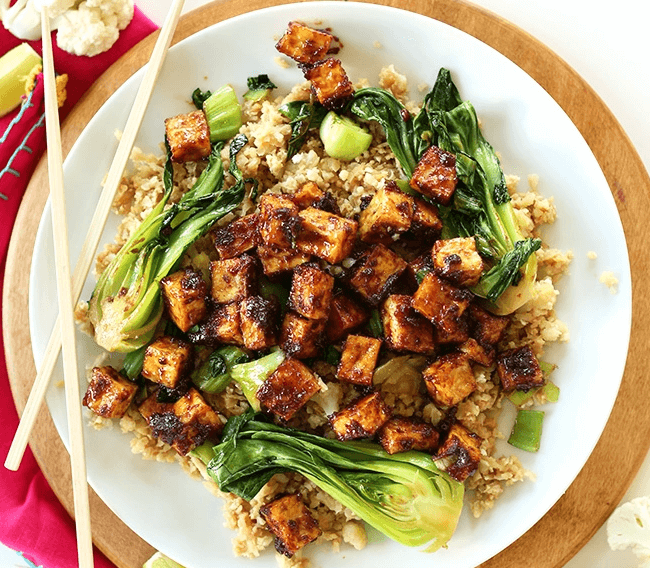 Since tofu and peanuts are both excellent sources of leucine, here’s another way you can combine them.

It’s high protein while being relatively low in carbohydrates since it swaps out rice for cauliflower.