Vitamin D deficiency is a problem for  both vegans and omnivores alike.

Recent research shows that around 77% of Americans are vitamin D deficient, particularly in the winter. Most symptoms aren’t life threatening (e.g. headaches, fatigue), but they will significantly affect your life.

Vegans face an even greater challenge because the only good food sources of vitamin D are animal products.

Technically some mushrooms have vitamin D, but their form isn’t absorbed well.

So if you aren’t spending a lot of time in the sun during summer to fill up your vitamin D stores, a supplement will help you feel a lot better.

What to Look for In a Vegan Vitamin D Supplement

I’ll try to keep this brief and simple.

There are 3 main things that you need to consider when looking for a vitamin D supplement:

Let’s go through each quickly.

Vitamin D has several forms, but the 2 dominant ones that you’ll see in supplements are vitamin D2 and D3.

Vitamin D2 is found in mushrooms as far as food goes, and is the type often added to fortified foods. Unfortunately, studies have shown that vitamin D3 is far more effective than D2 at raising the blood levels of the usable form – calcifediol.

Your skin produces vitamin D3 when you spend time in the sun. In contrast, vitamin D2 is produced by plants and mushrooms exposed to sunlight. D3 is somewhere on the order of twice as effective according to some studies.

So while D2 is better than nothing, there’s no reason not to look for a vegan version of D3. All the top products that I’ll go over later are vitamin D3.

How is Vegan Vitamin D3 Made?

Most vitamin D3 is not vegan; Vegan versions are made from lichen (an algae-like plant), whereas non-vegan D3 is extracted from lanolin (sheep’s wool oil) typically.

Vitamin D comes in 2 forms – D2 and D3. Vitamin D3 is by far the better form, so get a vegan supplement that contains D3, which will be made from lichen (a plant).

How Much Vitamin D Should You Get in a Supplement?

There’s a lot of debate about this between medical professionals and in literature.

Side note: IU means “International Unit”, which is based on the actual biological effect that a substance have. This let’s us compare the effectiveness of different forms of substances (like vitamin D) against each other.

If someone is severely deficient in vitamin D, they will often get supervised doses of up to 25,000 IU multiple times a week.

In one study of elderly people, 400 IU per day was not enough to prevent fractures, but 700-800 IU per day did reduce the chance of fractures. So that’s probably the minimum you want.

One warning before moving on: Vitamin D is a fat-soluble vitamin, which means that you don’t necessarily just excrete the extra.

It is possible to get too much and get sick. There’s also some evidence that too much vitamin D can cause insomnia symptoms.

Currently, the tolerable upper limit for someone who is healthy is 4,000 IU, according to the NIH. 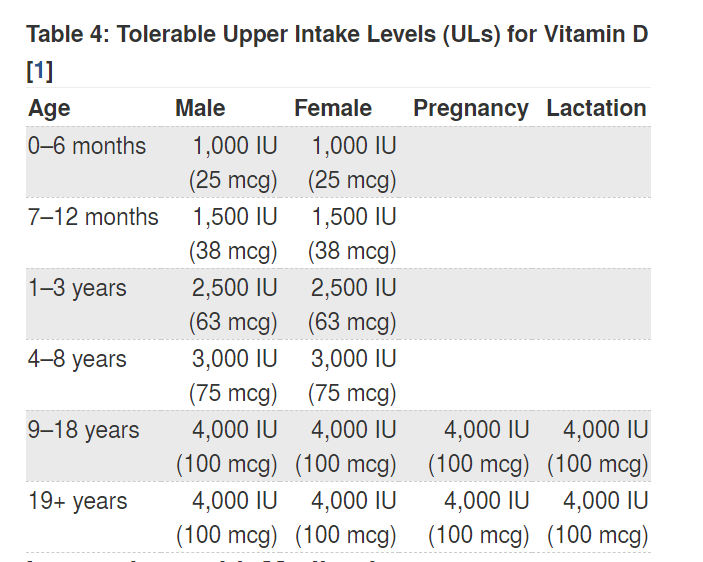 It’s completely fine to get a supplement with 5,000 IU per serving, and just have 1 serving every other day (or split a capsule in half). Completely up to you.

A good vitamin D supplement should give you at least 1,000 IU per day (although you can take multiple servings for smaller doses). Getting too much vitamin D may cause insomnia and other symptoms, so follow the dosage directions on your supplement.

Do You Need to Take Both Vitamin K and D3?

Finally, if you did any further research about vitamin D, you’ll notice that vitamin K is often mentioned.

Both the vitamins have functions related to each other, and there are concerns that very high doses of vitamin D may deplete vitamin K stores, leading to a vitamin K deficiency. This could lead to blood vessel calcification, which is associated with heart disease.

No conclusive research has proven this yet, but you should be aware of it.

Keep in mind that the concern is for high doses of vitamin D, so you could also be more conservative with your supplement’s dosage if you’re worried about this. If you want to be on the safe side, you could also take a vitamin K supplement alongside vitamin D.

There may be a benefit to having extra vitamin K (in your diet or a supplement) if you’re taking high dose vitamin D if you’d like to be on the safe side.

Now we can actually get to the most reputable and high quality vegan vitamin D3 products.

To get full effect from a vitamin D supplement, eat it alongside some sort of fat. It’s a fat-soluble vitamin, and will absorb better than if you consume it alone.

Here’s a summary chart that will help you narrow down your prospects, note that they are all vitamin D3:

Now let’s go into each in a bit more detail. 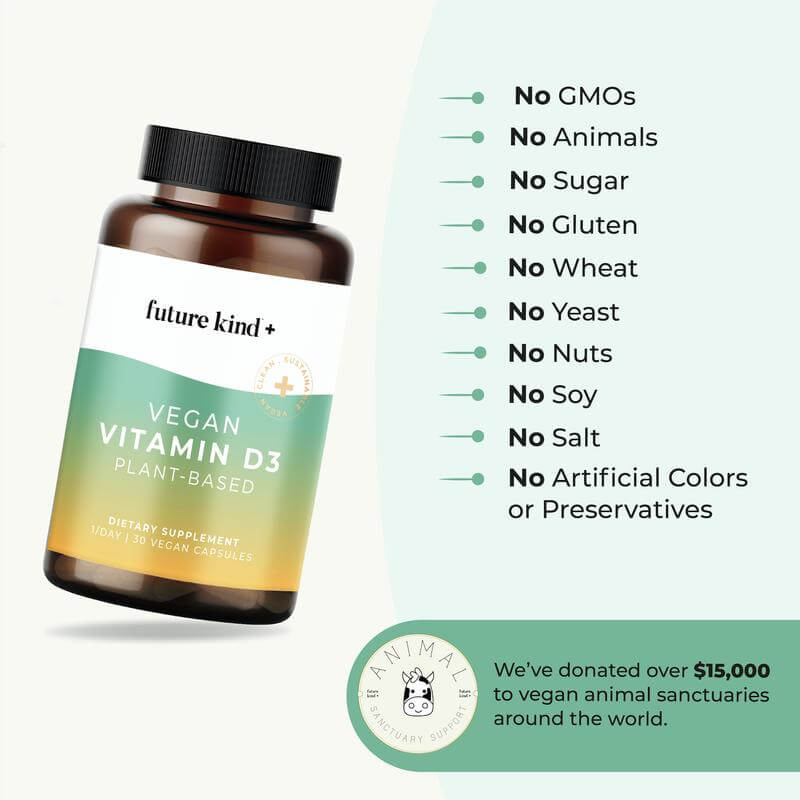 I like Future Kind as a company. They only makes vegan products, and every one that I’ve tried has been high quality (i.e. they always use the more effective form, D3 vs. D2 in this case).

Future Kind’s vitamin D3 supplement only contains vitamin D3, and the bare minimum needed for capsules (vegetable cellulose and rice flour). There’s 2,500 IU per serving, which I find to be a nice amount personally. It’s well over that minimum recommended level, but not close to a potentially dangerous amount.

The packaging is also 100% Post Consumer Recycled PET, which is about as sustainable as plastic can get right now. 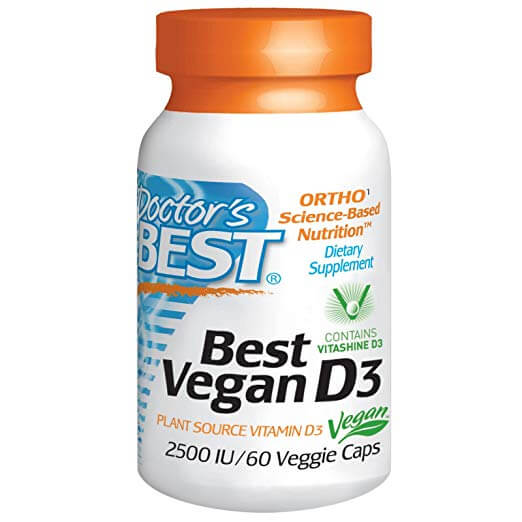 Doctor’s Best is a very popular supplement manufacturer (both for vegans and non-vegans).

Their non-vegan D3 is extremely popular and highly rated.

This product is about as cheap as you’re going to get for a vegan vitamin D3 supplement.

While it’s not that big of a deal, there is a bit of maltodextrin and sucrose (sugars), but you won’t taste those much. 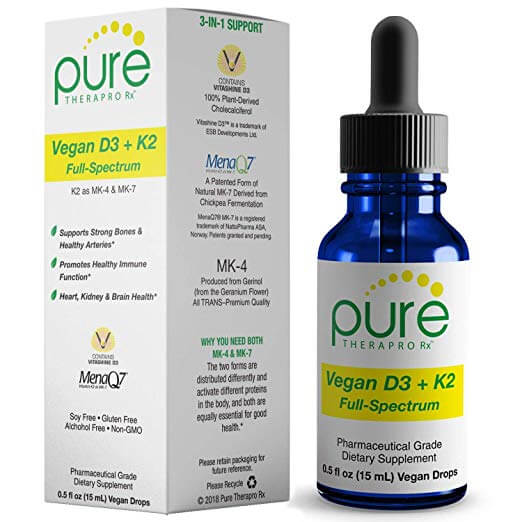 Just in case it’s confusing, “Pure” is the name of the company, it’s not like this product is any more pure than the rest here.

This is the only supplement here that is in liquid form.

Each drop gives you 1,000 IU, so you can easily choose whatever dose you want.

Unlike pretty much all others, it has vitamin K2 built-in as well. You get 136 mcg per drop, which is a tiny bit over 100% of the RDA for an adult male.

The drops also include coconut oil and olive oil, which provide the fats you need to absorb the vitamins effectively.

Overall this is my personal favorite of the ones on the list. It’s convenient, reasonably priced, and gives you everything you might need all in a few drops. 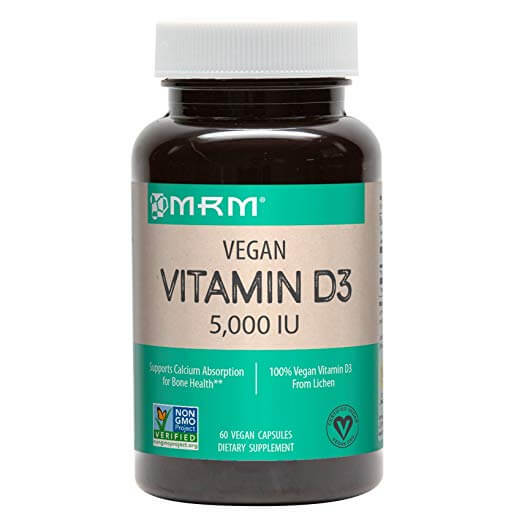 MRM makes a wide range of vegan supplements. I first tried one of theirs when I came across MRM’s vegan protein powder, and they make pretty high quality stuff.

This vitamin comes in a standard sized capsule, with 5,000 IU per serving.  Great for someone looking for high doses, but you can always split it up into halves if you think that’s too much.

On top of the standard capsule ingredients like rice flour, there’s also maltodextrin and sucrose. Small amounts, but if those really bug you, try a different option. 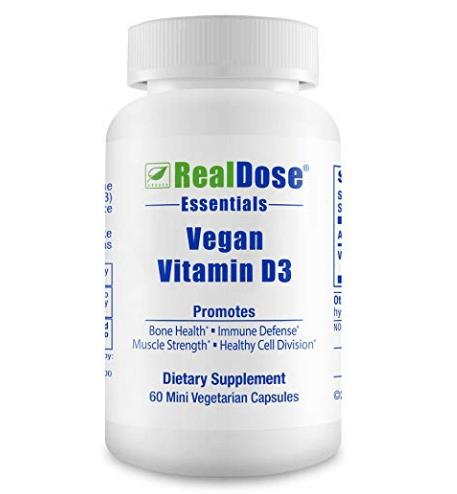 If you have trouble swallowing full sized ones, these are a good option.

It’s also one of the few capsules with no sugar at all.

Each capsule has 1,000 IU, which is perfect if you wanted to be on the safe side. 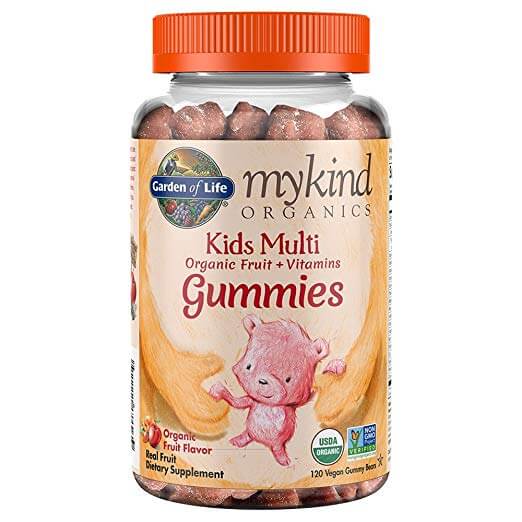 There aren’t many options for children, but I came across this multivitamin that has 800 IU of vitamin D in it that’s made for kids.

Garden of Life is a very well-known vegan supplement maker, and most kids will love the taste of these.

That’s mostly due to the 5 grams of sugar per serving, but I assume that’s necessary to get kids to take a “vitamin” of any kind.

The cost is a bit high, but you won’t find many other options for children if you’re looking for them.