They wouldn’t do this if it wasn’t necessary, so common sense tells us that being pregnant has something to do with lactating.

However, I think where most people get confused is that cows are not continuously pregnant.

Here’s how the cycle looks like from a high level:

The way it’s talked about sometimes in vegan circles can give you the impression that as soon as a calve is birthed, the cow is inseminated again.

In reality, a dairy cow produces milk for months after birth.

It’s still an ethical issue, and a valid reason to go vegan, but it’s good to have a clear picture of what actually happens on a dairy farm, instead of spreading misinformation (purposefully or not).

I’ve seen a few discussions about injecting dairy cows with certain hormones to simulate a pregnancy and stimulate lactation.

However, there’s not too much actual research on this at the moment as far as I can see, and it’s certainly not going to be standard practice any time soon.

So for now, yes, dairy cows do have to get pregnant in order to produce milk. However, they aren’t pregnant while milking actually occurs.

This is just one of the reasons why vegans don’t consume dairy.

Are Cows Happy Being Milked?

Most of us have pictures of happy cows being milked in our heads.

This probably came from cartoons and misleading ads while growing up.

But reality is quite a bit different.

Dairy farming is a business, and cows are treated as objects to get milk (yes I’m sure you could find 0.1% of farms that treat their animals really well).

It’s sad that we treat animals as intelligent as cows as products like this.

Here, let’s focus specifically on how much a cow likes or dislikes being milked.

The first misconception that most have is that most milking is done by hand.

One common tool for large scale milking is the rotolactor: 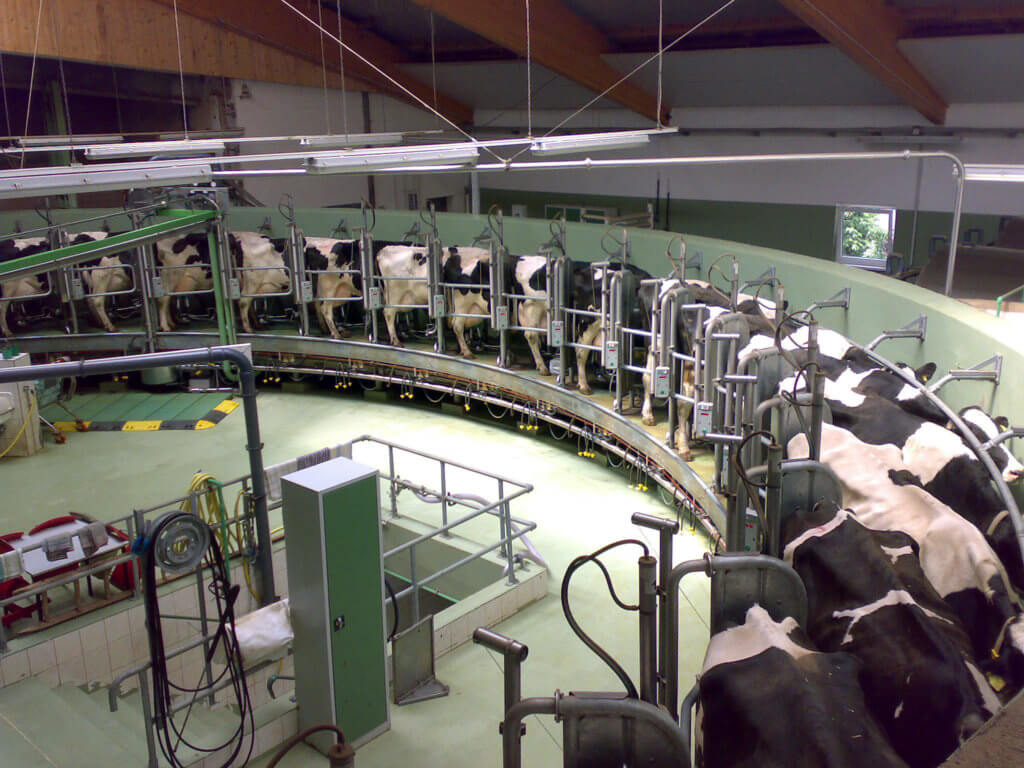 It’s a tricky question to answer because cows can’t exactly talk, but I’ll try my best.

To start with, consider that dairy cows are bred to maximize milk production. In the last 40 years alone, average production has doubled, and we’ve been breeding cows in this way for much longer.

But when you breed animals (or even plants) for specific traits, there are trade-offs. In this case, high producing dairy cows are at higher risk for a variety of health problems like lameness and mastitis.

This is partially due to having to be milked more often, which causes soreness and even open sores.

So even if milking is done perfectly, dairy cows are already likely not to be happy due to these complications of breeding.

What About Cows On Smaller Dairy Farms?

Even on smaller dairy farms you still have the same types of cows bred for maximal milk production.

However, the milking process might be less automated and gentler.

Let’s pretend the conditions are ideal, for the sake of the original question.

The milking process itself is pretty neutral. It’s not particularly enjoyable, but not too painful either. It’s not so different to a woman who breastfeeds her children.

However, if there is too much milk stored, it can cause the cow pain. Milking will relieve this pain. Think of it like having a full bladder and finally getting to urinate, it’s a big relief.

One other factor to consider is that mother cows have strong maternal bonds with their calves. If they were feeding the calves, I’d imagine they’d enjoy it more.

Summary: Do Cows Enjoy Being Milked?

To answer the original question directly, cows feel relief when being milked if they have too much stored. This is common since modern dairy cows have been bred to overproduce milk (more than they would need to feed calves directly).

Essentially, we’re breeding dairy cows to be in discomfort just so we can relieve it. So it’s pretty neutral overall (not particularly painful or pleasurable).

However, cows definitely don’t enjoy the multitude of health problems that they are more likely to get as a result of specialized breeding over the years.

You’ve taken a great first step trying to understand if dairy is ethical or not, but I urge you to keep researching. It ends up being one of the most common reasons people go vegan.

There are many ethical issues when it comes to the treatment of dairy cows that I believe are more impactful than the enjoyment of milking.

This includes taking away baby calves within 1-48 hours, poor living conditions, breeding side effects (as discussed), and slaughter after milk production slows down.