When it comes to butter alternatives, Smart Balance and Earth Balance are the 2 most popular options.

While they both market the products as “healthy,” a closer look at the ingredients gives me some doubt.

It may be healthier than butter, but is it a healthy food in general? That’s what we’ll answer here. 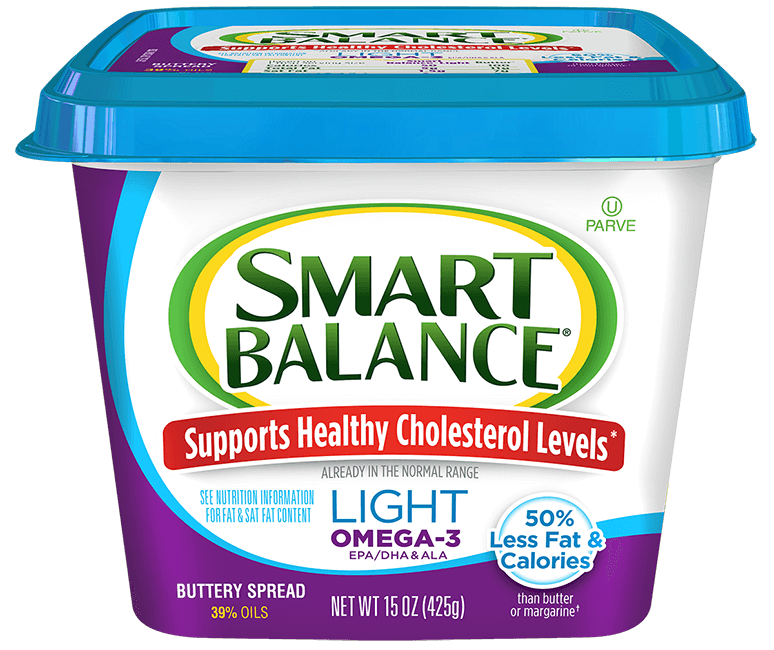 Let’s start with the main ingredients.

The ingredients do vary based on the specific variety of Smart Balance, but all of them are made of 98%+ of just 2 types of ingredients:

In other words, Smart Balance is essentially just oil with a small amount of other ingredients added to create a desirable texture and flavor.

Is the Vegetable Oil Blend in Smart Balance Healthy?

Again, each product has a slightly different mixture of oils, but most of them are focused on canola and palm oil.

Palm oil is terrible for the environment and most people get way too much of it as it is. It’s high in saturated fat, and while it has some nutrients, it’s not particularly healthy.

I’d like to focus more on canola oil here, which is the main ingredient of every Smart Balance margarine.

Canola oil is used because it’s cheap and has a pretty neutral flavor. It’s marketed as “heart healthy” because it’s low in saturated fat and high in unsaturated fats. However, in order to extract it from the seed, canola oil is highly processed, which destroys any trace of healthy antioxidants (source).

In other words, you’re left with pure fat molecules and pretty much nothing else.

How healthy canola oil is currently quite controversial, here are the most important things I think you should be aware of:

Many of the studies in the past that have shown canola oil in a positive light were funded directly by the canola oil industry. That doesn’t necessarily mean all the results are invalid, but I trust them less than the independent studies mentioned above.

Other Ingredients in Smart Balance

You’ll see several other ingredients on the package of Smart Balance, preceded by “less than 2%”.

These are all present in such a small amount that unless they’re incredibly healthy or unhealthy, they won’t make much of a difference.

Most of those are just:

All of those are common ingredients added to foods that are deemed as safe, and I wouldn’t have any concerns about them.

Finally, let’s take a look at the nutritional profile of Smart Balance before wrapping up.

Here are the nutritional facts of one serving (1 tbsp or 14 grams) of the original Smart Balance:

As mentioned before, it’s all fat.

There’s a small amount of vitamin A (beta carotene) and vitamin D that are added in small amounts.

Many people can use more vitamin D, so this is a small positive.

While it’s good to get at least some fat in a diet, most people don’t struggle to get enough of it. Smart Balance provides very little nutritional value that people lack in a healthy diet.

Ultimately, we’ve seen that Smart Balance is essentially just canola oil mixed with one or two other vegetable oils.

The evidence on whether or not canola oil is actually healthy is controversial at best. Most positive studies are industry funded, while recent independent reviews seem to find either no positive effects or even a negative effect of regular canola oil consumption.

Aside from that, Smart Balance has next to no nutritional value, especially compared to something like virgin olive oil.

Overall, Smart Balance is not particularly healthy, but also not unhealthy in reasonably small servings.