I spent a few hours looking for vegan cereals with vitamin B12 in them.

Unfortunately, there aren’t too many options.

And if you don’t like the options, you’re stuck with vegan vitamin B12 supplements for now.

I’m very hopeful that I can add to this list over time as more vegan cereals pop up.

Also, I looked at major brands. You may be able to find a niche brand that local stores carry that has B12, so don’t give up all hope until you double-check.

Vegan Cereals With B12 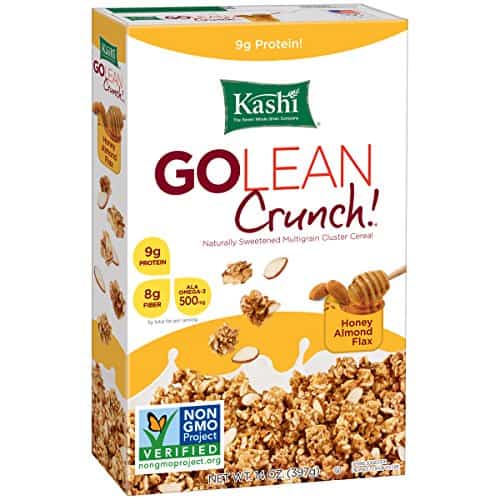 When I first wrote this, I could only find one brand for now has cereal that is clearly vegan and has vitamin B12 added to it – Kashi.

Not all of Kashi’s flavors are vegan, so you need to be a bit careful, since many have honey in them.

I’ve made a detailed guide to vegan Kashi cereals that you can refer to for the full details, or just stick to these Kashi varieties:

Cereals With B12 That Are Maybe Vegan

The biggest problem that became obvious is that the cereal makers that add vitamins to cereals typically add vitamin D3 along with vitamin B12.

Vitamin D3 is the one vitamin that typically isn’t synthetic and isn’t vegan. It’s derived from the oil in sheep’s wool.

That being said, some vegans will still eat cereal with vitamin D3 in it. That’s because it’s in such a small amount that it would take several thousand boxes of cereal to add up to the oil that shearing a sheep would give.

So it comes down to what you feel is “reasonable,” which can differ from vegan to vegan.

On top of the D3, there are a few other ingredients that may or may not be vegan in many cereals:

Click those links to see my detailed overviews for each ingredient, then decide for yourself if you’re willing to eat them or not.

If you’re a little more relaxed in your definition of veganism, you may feel fine with eating many of the cereals below, that all have vitamin B12.

Some are obviously not as bad as others. There’s a decent chance that certain Malt-O-Meal cereals are actually vegan.

If you come across any other cereals you think fit on this page, please share them in the comments below.