Verdict: Most Mentos products are not vegan..

I’ve seen a lot of claims that Mentos gums and mints are vegan, and also some that say they aren’t.

Very few had anything to back them up, and the ones that did were from nearly 10 years ago.

So, I decided to take a look for myself.

I’ll walk you through what I found.

After looking at the ingredients in all the flavors of Mentos gum, some are clearly not vegan, while some may be vegan-friendly.

First off, gelatine is never vegan, it comes from animal sources. So that means that the following flavors are NOT vegan for sure:

But then there are 4 other ingredients that you’ll find in all the other flavors that are a bit trickier:

If you’re okay with artificial colors, I think there’s a high chance that Mentos gum is vegan. 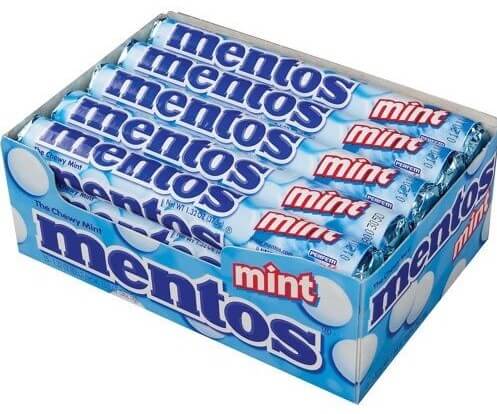 To start with, let’s take a look at the ingredients of the original Mentos mint flavor:

There’s a clear issue at the very end of that list – beeswax.

Not all flavors have it, but some do. These flavors of Mentos mints are clearly not vegan due to containing Beeswax:

**Update – It seems like Mentos may have removed the beeswax from some of these flavors, at least in certain locations. Double-check the labels yourself if you really want to get one of these.

That only leaves 2 flavors: rainbow and green apple.

These both have 2 other potential issues for vegans, highlighted in the ingredients list above:

If you want to take a gamble, those 2 flavors might be vegan, but I don’t think it’s likely.

Finally, let’s look at the hard mints, which you’ll find in a little plastic or metal tin.

There are 2 types of hard mints, with significantly different ingredients.

First, the “cleanbreath” mints, which come in the plastic containers. Here’s what the ingredients look like:

Most magnesium stearate is made from plants, so that’s not a big concern to me.

The only potential issue is the artificial coloring (Blue 1). Some vegans are okay with this, and some aren’t. I’ll let you decide.

Second up are the “NOWMints,” which come in little tins.

The only potential issue I see there is the natural flavors. But as I said earlier, it’s very likely that those are vegan.

I’m quite strict on what I take chances on, and I’d be comfortable assuming these are vegan.

After all that, let me try to summarize which Mentos products are and aren’t vegan.

Of those “maybes,” I don’t think it’s likely that any of the mints are vegan, however, the gum probably is.

If you’re looking for vegan Mentos products, stick to the “hard” mints. Even the ones I have in the “maybe” column are likely vegan.