Green and brown lentils seem very similar to me.

Red lentils are made by removing the hull of certain varieties of lentils, leading to the smaller size. This also results in some differences in taste and nutrition.

I’m going to go over the different nutritional aspects of brown and red lentils to see if there are actually any major differences besides my perception of them.

We’ll start by looking at the main macros for both.

This data comes from the USDA’s food database.

Note that this data is for raw lentils.

Almost everything is the same, except the fiber. That makes sense, since red lentils don’t have their outer shell (which is mostly fiber).

Brown lentils have over double the fiber that red lentils do. That would make red lentils better for new vegans having stomach problems.

Besides that, most people eating lentils and legumes get more than enough, so I don’t think this difference is very important.

Since red lentils are just brown lentils without the shell, it’s not surprising that they have almost identical nutritional content. However, the husk does contain some nutrition, mainly fiber.

Still, we can compare the data that is available:

Of the nutrients that we have complete data for, brown lentils have slightly less vitamin C and calcium, but more iron.

Since lentils are one of the best vegan sources for iron, it’s the reason a lot of people eat them. It’s probably the most important nutrient here.

Brown lentils definitely have magnesium, potassium, and zinc. It’s likely similar to the levels found in red lentils, but we can’t say for sure if it’s better or worse.

While brown lentils will offer a bit more nutrition, it appears that red lentils have a comparable amount of vitamins and minerals. If you like the taste of red lentils more and will end up eating more, they could be better for you specifically.

Which Lentil Will Give Less Gas?

As mentioned before, many people who are new to plant-based diets often try legumes like lentils for the first time and struggle with gas afterwards.

Legumes are known to cause gas for 2 main reasons:

The oligosaccharide content is bit higher in red lentils, but because red lentils contain so much less fiber, they will give most people less gas.

Are Brown or Red Lentils Better? 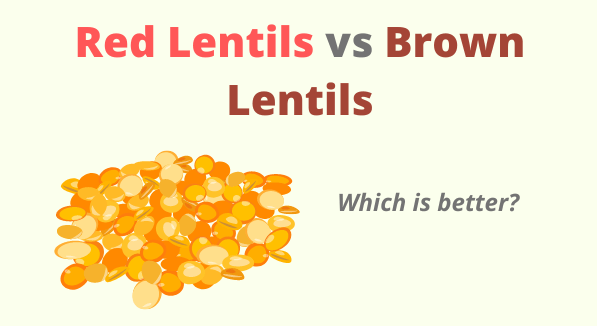 I wouldn’t say there’s a clear winner, especially since we don’t have complete data.

However, we can say that brown lentils and red lentils are both very similar from a nutrition standpoint.

Brown lentils have much more fiber, which may be something you want to add to your diet. They also have more iron, which is almost always a good thing to get more of.

For the most part though, unless one of those specific reasons are very important to you, I’d say just to mix it up or eat the ones you enjoy the most.

I think the more interesting comparison at this point is lentils vs beans (other legumes).