Of all vegan protein powders, pea protein is by far the most popular.

This post is my attempt to create a summary of the biggest pros and cons of pea protein, backed by research and data whenever possible.

For the most part I looked to compare pea protein to whey and also against other common non-dairy protein powders like hemp and rice.

Overall, pea protein has a lot of the same benefits as whey protein, which is widely regarded as a very high quality protein source.

Pea Protein Is As Good As Whey For Building Muscle

Most people drinking protein shakes are interested in building muscle, so the biggest benefit of pea protein is clearly that it’s just as effective as whey.

You can read more in my guide to vegan protein, but let’s look at a few quick studies here.

Since no difference was obtained between the two protein groups, vegetable pea proteins could be used as an alternative to Whey-based dietary products.

This isn’t all that surprising, considering there are huge vegan bodybuilders and even vegan professional basketball and football players.

In terms of actual results, pea protein is just as effective as whey protein for building and maintaining muscle tissue in typical situations.

Pea Protein is Rarely an Allergen

A lot of people have issues with dairy, whether from an allergy or intolerance.

Whey protein does have way less lactose than milk, but still enough to give many people unwanted side effects.

While it is possible to have a pea protein allergy, it’s pretty rare. It will likely become more common since pea protein is being increasingly used in food products, but still much less common than dairy allergies and intolerances.

In addition, most pea protein is free from gluten, nuts, and soy, so most people with other intolerances or allergies can usually have pea protein without issues.

For the time being, the vast majority of people can tolerate pea protein without an allergic reaction or side effects of intolerance.

Compared to whey protein, pea protein is less likely to give you nasty “protein farts”, mainly due to having fewer sulfur compounds (that’s what gives them the unique smell).

Even though legumes are known to cause gas, this is due to the oligosaccharides and fiber in the whole legumes, which are almost entirely removed from powder.

While pea protein shakes still might give you some gas or bloating, it’s substantially less than for most people than an alternative like whey.

Pea Protein is Relatively High in BCAAs for Plant Protein

One reason that whey protein is considered such high quality protein for athletes is that it’s high in the 3 branched chain amino acids (BCAAs) leucine, isoleucine, and valine.

While pea protein doesn’t have quite as much as whey if you add up the percent of protein made by BCAAs, it’s not that far behind, and it’s better than some alternatives like hemp protein.

The total amount of BCAAs in your diet likely won’t make a substantial (if any) difference in your muscle building results as long as you’re getting enough protein overall, but it’s nice to be on the safe side.

While I don’t think any of these 4 cons are that significant, you should still be aware of them.

Peas (not Protein Powder) Are High in Phytic Acid

I wanted to start with this topic because I’ve seen more than a few mentions that pea protein is high in phytates, which makes it bad for you.

There are 2 things you need to know up front:

But here’s the thing: Pea protein is significantly different from peas themselves.

It turns out that pea protein does have a higher amount of phytates than soy or wheat protein, but it’s still a fairly low amount overall.

With that being said, phytates can be reduced by:

These methods can reduce phytates to a very small amount.

If this is a concern for you, you can buy sprouted pea protein, although the ones I’ve tried haven’t tasted very good.

Pea protein powder does contain higher levels of phytates than other types of protein powder, but the amount is still relatively low and is unlikely to hinder nutrient absorption significantly.

There are heavy metals in pea protein powder, but this subtitle sounds scarier than it actually is.

There have been some alarmist posts and videos in recent years, but I put them into context in my guide to heavy metals in vegan protein powder if you’d like to read more.

The long story short is that pea protein does contain heavy metals, but still a relatively small amount that is comparable to the amount in other food you eat.

It’s reasonable to be wary of ingesting heavy metals, but having a few shakes a day won’t put you over the “safe” amount designated by health organizations.

And while we’re on the topic, whey protein also has heavy metals in it, particularly arsenic. A Consumer Report test found significant amounts of heavy metals in 15 different whey-based commercial products. 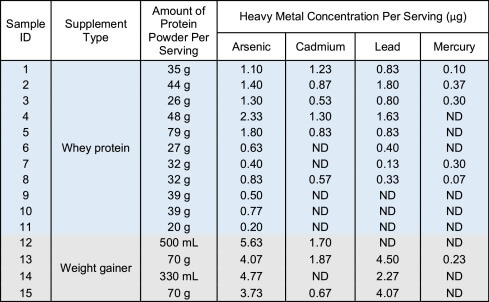 If you’d like to limit heavy metals from pea protein, buy from a brand that sources peas from Europe or North America.

Some research has shown that crops like rice and legumes in China by E-waste recycling sites are particularly high in heavy metals (crops absorb them from the soil).

While there are detectable amounts of heavy metals in pea protein, it’s still a relatively small amount. You’ll find some heavy metals in most foods, including other types of protein powders.

Pea Protein is Not Complete

If you look at the amino acid profile of pea protein, you’ll see that it’s not “complete” because it’s a bit low in methionine (see table below).

But unless you are only getting protein from pea protein shakes, and are in a food scarce environment, this really doesn’t matter.

As we’ve seen before, pea protein produces the same results as whey protein supplementation. Read more about the complete protein myth if you’d like more details about why it doesn’t matter.

I only included it here because I know some people will wonder about it.

My bills definitely went up when I switched from whey to pea protein powder.

Pea protein isn’t outrageously more expensive, but it’s noticeable. Buying in bulk and on sales can go a long way to make it more affordable.

With that being said, pea protein is typically quite a bit cheaper than other non-dairy protein powders like hemp and rice.