I’ve tried dozens of vegan protein powders, and in general, they give me far less gas than before I was vegan and drank whey shakes.

Avoiding the dairy in the protein powder, plus not mixing it with milk reduces gas for most.

But still, I’ve seem many vegans still struggle with the dreaded “protein farts,” even when using plant-based powders.

There are 5 main reasons that you still might be having stomach problems.

You Need to Give it Time

Whenever you make a big change in your diet, it takes your body time to adapt.

If you’ve just recently started drinking protein shakes, or increased the amount you drink, your body may just be in an adjusting period.

Give it 2-3 weeks, and if you’re still having issues, it’s likely one of the other reasons.

Consuming a lot of a new food can give you gas while your body adapts, monitor any gas for a bit to see if it improves.

You’re Not Spreading Out Your Protein Intake

Protein can be digested by your body in 2 ways.

The preferable one, that accounts for the vast majority of digestion, is to have your small intestine break down the protein into amino acids, which can then be absorbed.

But if you’re consuming a lot of protein in a short period of time (say 100+ grams in just a few hours), only a portion can be broken down by the small intestine.

The rest of the protein goes to the colon (part of the large intestine), where it’s digested by microbes. These produce hydrogen sulfide gas that smells terrible, and which you have to expel somehow (i.e. by farting).

The solution? Spread out your protein intake as much as possible. Start as early as possible, and end as late as possible. Certain diets like intermittent fasting limit your ability to do this, but do your best.

Consuming multiple large protein shakes can lead to extra gas production. In addition, drinking shakes alongside a large meal can have a similar effect.

You Could Be Sensitive to the Ingredients 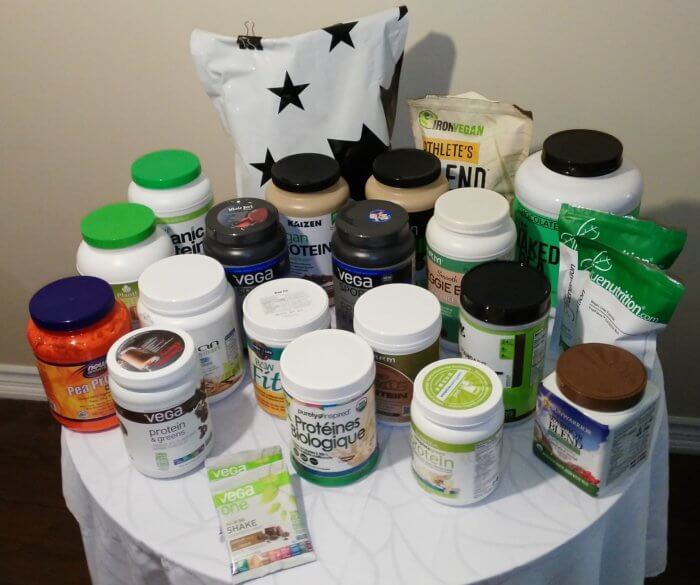 When we think of food giving us gas, we typically think of things like dairy as the obvious ones.

But some people are sensitive to ingredients they never even thought of, and it doesn’t become clear until they eat them in a concentrated dose.

A certain type of plant protein (e.g. soy, brown rice, pea, quinoa, etc.) could be giving you issues. Some people get gas from pea protein powder, but not from others. You can try a different plant-based powder to confirm if this is the issue.

The more common food sensitivity is sugar alcohols. These are the sweeteners that are often added to protein powders, like erythritol (they all end in “ol). See if your powder has any that could be giving you issues.

And while it’s not common, some people do have issues with stevia, which is in most vegan protein powders. An unflavored alternative is your best bet if you think this is the case.

Trying a few different types of vegan protein powder can help identify if you are sensitive to any one in particular.

It Could Be the Rest of Your Diet

If you’re consuming protein shakes and relatively unhealthy/non-nutritious food, the gas is likely to be even worse.

In particular, getting enough fiber can be helpful as will compete for digestion resources in the large intestine, limiting how fast gas is produced by any protein that made it that far.

With that being said, eating too much fiber from other foods can also be an issue. Many plant-based foods can cause gas because the carbohydrates they contain can’t easily be digested and end up fermenting in the gut. For example:

If you’d like to test if this is a factor, have a shake on an empty stomach and see if you still get gassy.

Many vegan foods are high in fiber or other carbohydrates that are hard to digest like oligosaccharides that lead to bacterial fermentation and gas production in the large intestine. It could be something else you regularly eat that gives you most of your gas.

None of the Above: It Could Be an Unrelated Condition

It’s possible that you’ve had an issue that contributes to flatulence long before you started drinking protein shakes.

But because you’ve heard of “protein farts” before, now you’re paying a little more attention to them.

Or, they could truly be worse, but it’s not just the protein powder, the shakes are just exacerbating an underlying issue like IBS or other food sensitivities.

You can experiment with your diet yourself if you’d like and it’s not a huge issue, but this is probably the point where you should go see your doctor and try to figure out if there is any other issue that could be causing your stomach problems.

A bit of gas is normal, but if you’re having consistently terrible gas, there could be something else that requires medical attention.

Another Option That May Fix Gas From Protein Shakes

Some vegan brands contain digestive enzymes that make digesting the protein in the powder easier.

While I’ve never had significant stomach issues with protein shakes, I have noticed that the powders with digestive enzymes feel “light” when it comes to digesting them.