Bars can be a convenient way to help get enough protein as a vegan, but after trying a few pretty gross vegan protein bars, I set out to find the best ones.

I was hoping to find at least one that had a solid amount of protein, was low in sugar, tasted good, and didn’t cost too much.

So I spent about 2 months collecting and testing vegan protein bars that had good reviews or were recommended by other vegans. I did a similar thing to find the best vegan protein powder if you’re interested.

I developed a testing process that was as fair as I could come up with to score each bar so that I could find the best overall bars.

The 20 Vegan Protein Bars I Tested 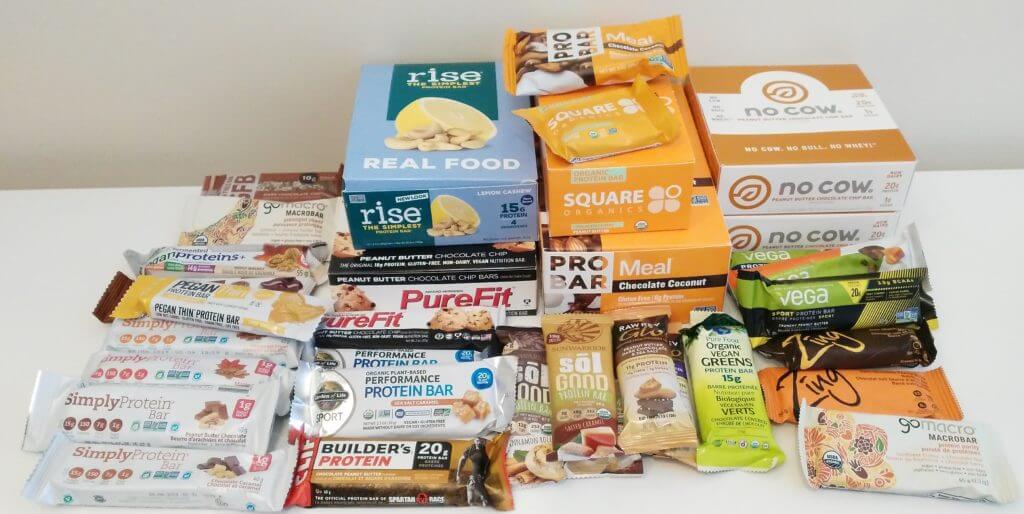 After spending some time browsing online stores, forums, Reddit, and social media, I had a list of 25 plant based protein bars that I wanted to test.

These bars were supposed to be the best of the best vegan protein bars, and I wanted to put that to the test.

I wasn’t able to find all of them, but I did manage to get most of them. Here’s a list of the bars that I reviewed:

How I (Fairly) Tested Each Bar

After buying the bars, I needed a way to test them, ideally with as little bias as possible.

First, I identified the 3 most important parts of a good protein bar and scored them out of 10 (where a higher score is always better):

I created a simple formula to calculate both protein content scores and cost scores to remove bias.

The scores are relative to the best in each category, so a 10 means that it’s the best you’ll find for a vegan diet.

Taste is subjective of course, but I tried to be as consistent as possible. If you look at the individual reviews lower down on the page, I describe why I decided on each taste score, and include a picture of each bar so you can get an idea of what it would taste like.

The data in the comparison table below is a summary of all my testing.

Note that since palm oil is a controversial ingredient among vegans, I’ve marked every bar that contains palm oil with an asterisk (*) besides its name. It’s worth mentioning that all the bars with palm oil on this list claim to use sustainable palm oil.

The table above should help you narrow down your options.

I’ve gone over each bar in a bit more detail below (in order from best to worst overall). There’s a link to a detailed review for each at the end of each section.

Again, I’ve put an asterisk (*) next to the titles of bars that contain palm products in case you want to avoid those entirely.

The Simply Bar is tied for the top score overall with 2 other bars, but since it doesn’t contain palm (and the other 2 do), I think it will appeal to more people and deserves to be listed first.

Here’s a quick glimpse at its score breakdown:

Depending on where you buy them, you may be able to find the variety pack so that you can try out multiple flavors. Otherwise, my favorite was peanut butter chocolate of the ones I tested.

I didn’t order the other 2 top bars in any particular order. Clif Builder’s bars are easy to find in store, has palm oil, and is soy protein based.

Most Clif bars are vegan, including these protein bars. Just be careful that you don’t buy Clif’s whey protein bars by accident.

Here’s a breakdown of its scores:

Of the top 3, it’s the best tasting bar, but has the lowest protein content. This is due to the high sugar content (contains beet syrup, organic brown rice syrup, and organic cane syrup, which makes it okay as a post-workout bar, but I don’t know if I’d want to eat it otherwise.

The third “first place” protein bar also has palm oil, but is a lot “healthier” than the Clif bars (above).

There’s a ton of fiber, and minimal sugar, so minimal net carbs. Instead, they contain a mix of sugar alcohols (erythritol) and artificial sweeteners (stevia).

No Cow Bars are also soy-free, with a mix of brown rice and pea protein isolate.

Here’s why it scored so well:

It’s sold in a ton of different flavors beyond the standard peanut butter chocolate. There’s cookies ‘n cream, birthday cake, and vanilla caramel, and many more, so you can always mix things up.

The Pegan bar is a soy free bar that’s only a point behind the top 3. As the name suggests, it’s both a paleo and vegan bar, the protein comes mainly from sacha inchi (a type of mountain peanut).

It’s not only relatively high in protein, it has a ton of fiber (26 grams of fiber per bar!) and is low in sugar (with no added sugar).

Let’s break down its scores:

The PROBAR Base protein bar is a certified vegan, gluten-free, mostly organic, soy protein based bar. Note that it contains palm ingredients.

While I didn’t specifically look for it, I don’t think most of these protein bars are kosher certified, but these are. They are also gluten and wheat free. Most of the protein comes from soy.

There’s a lot of sugar per bar though, with multiple forms of sugar and syrups (e.g. brown rice syrup, beet syrup, and more) in the ingredients list.

PureFit bars are solid overall, scoring decently in each category:

Of the 3 Vega bars I tested, this was the best overall. Note that all 3 have palm oil ingredients in them. This bar has a mix of pea and brown rice protein, and a considerable amount of added sugar.

The Vega Sport bar is very similar to the Vega 20g bar, but distinct product lines so I included them as separate bars in my testing.

Again, it has a mixture of brown rice and pea protein, but a bit less sugar (and slightly more calories overall).

It scored almost the same in each category:

This is the best overall certified organic vegan protein bar (well, tied with the next two). They have a lot of fiber and are low sugar, using artificial sweeteners instead (stevia).

Its protein comes from a combination of brown rice, pea, and quinoa protein to give a nicely balanced amino acid profile.

Square Organics scored just as well as the Sunwarrior bar, but it has some big differences. As the name suggests, it uses all organic ingredients.

Its protein mainly comes from brown rice protein, but some also comes from peanuts (depending on flavor). If you have a nut allergy, see my list of the best vegan protein bars without nuts.

Let’s take a look at how it scored in each category:

Orgain’s bar is also tied for the best organic bar. It has a mixture of brown rice and pea protein.

It’s very low in calories and a good low carb vegan protein bar. It’s one of the few to be sweetened with a sugar alcohol (erythritol), but be aware that not everyone likes the taste of sugar alcohols.

Here are the highlights:

This is the definition of an average plant based protein bar; it scored 7/10 in all categories.

The one interesting aspect of it is that it contains fermented pea protein (and 6 other fully fermented vegan ingredients).

It’s the only one I found that has fermented protein, which is intended to help digestion. I didn’t have any digestion issues with any of the bars I tried, but if you feel like you might, this could be a good one to try.

Here’s another average organic plant protein bar. I’ve tried Garden of Life’s protein powder as well, and I thought the bar was better than the powder at the very least.

It’s main source of protein is pea protein, and depending on the flavor there’s a bit that comes from nuts.

This bar has really nice packaging, but obviously it doesn’t compare so well to other popular bars.

It does have a nice simple and short ingredient list. The protein mainly comes from brown rice and pea protein. While the bar is not organic as a whole, many ingredients are organic.

Oh yeah, the Gluten Free Protein Bars are also gluten free (never would have seen that coming). Here’s how I broke them down:

For a casual bar, Zing bars actually aren’t too bad. They contain a combination of rice and pea protein.

Here’s how they stacked up:

Rise bars are another organic plant protein bar option. They were highly rated, which is why I included them on this list, but I wasn’t such a huge fan.

This score might be a bit harsh since I was only able to find the lemon flavor, which is a pretty weird flavor for a bar. The other 2 flavors might taste better.

Finally, the best part of this bar is its incredibly simple ingredient list. It’s short enough that I’ll just include it here:

Because this protein bar contain full nuts (instead of protein isolate extracts), a lot more calories come from fat (even if they are healthy fats).

Here’s how the scores came out:

Compared to protein powders I’ve tested in the past, where many were down right nasty, even low ranked plant based protein bars taste decent.

There aren’t many raw vegan protein bars, so even though this one didn’t score amazing, it’s an okay option if you’re on a raw vegan diet.

This is the third and final Vega bar I tested. It also has palm like the others.

It’s meant more as a casual meal replacement bar, and not for athletes who need to hit certain macros or protein targets. It’s main protein source is brown rice protein.

Here’s how the testing went:

Despite having 22 grams of added sugar, it still tastes bad. I really don’t know how that’s possible.

The main protein is brown rice protein, and the bar differentiates itself by having a mix of greens (wheat juice grass powder, broccoli powder) in the ingredients. But when you look at the nutritional facts, you’re not getting many vitamins or minerals.

Here’s why it scored the way it did:

The final protein bar on my list is another bar with all organic ingredients. The main protein source is brown rice protein.

Again, it somehow has more sugar than protein, but manages not to taste good. Here’s how it broke down:

If you’re still reading at this point, maybe none of the bars I reviewed quite fit your particular vegan diet. In that case, consider making your own. You can make substitutions like almond butter for peanut butter in case of further dietary restrictions.

Here are the best recipes for homemade vegan protein bars that I’ve found, which use ingredients like nuts, chia seeds, and organic pumpkin seed protein.