Cramps and body aches in general are not well understood.

We know that certain things cause them in certain situations, but it can be hard to immediately know the cause of cramps.

Let’s look at which types of muscle cramps could be caused by a vegan diet.

For example, the most common causes of muscle cramps are:

There are other causes of cramps and body aches as well, just not as common as those 4.

The only one of those directly relating to diet is mineral depletion.

So the question becomes: Does a vegan diet put you at a higher risk for calcium or magnesium deficiency, or for eating too much fat?

Let’s look at them one at a time, and then I’ll summarize at the end. 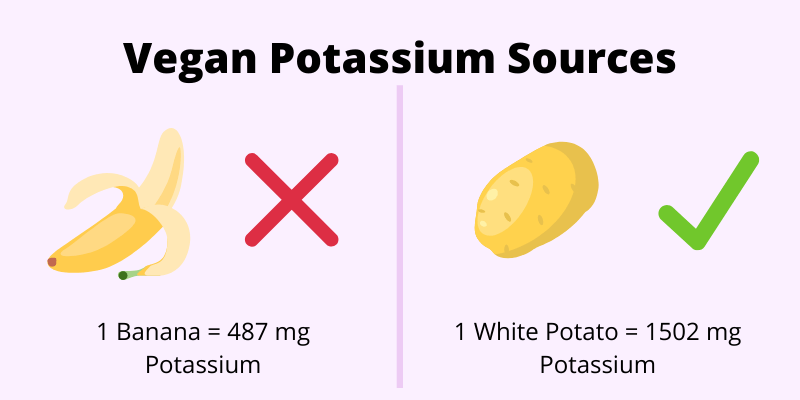 Potassium deficiency has known to cause cramps for a long time, that’s why the classic advice is to “eat a banana.”

And while bananas have a decent amount of potassium, you’ll have to eat a lot of bananas to get enough. When you look at the amount per typical serving, there are better vegan sources of potassium, including:

It’s not hard at all to get potassium on a vegan diet, and a deficiency bad enough to cause regular cramps is unlikely.

But if you’re eating no vegetables, it definitely is possible, just as it is on an omnivorous diet.

So it’s not the most likely cause of your cramps, but is a possibility.

It’s also added to lots of cereals and some non-dairy milks, so it’s unlikely that you’re deficient in magnesium to the point that it’s causing cramps.

How Do You Check for Potassium or Magnesium Deficiency

If you’re not sure if you’re deficient in either of those minerals, I highly recommend using a food tracker that shows you your mineral intake.

Cronometer is the one I recommend, here’s my full Cronometer review that explains why.

It lets you input what you ate for the day, and will show you how much potassium and magnesium you had (as well as a ton of other nutrients).

Do this for a few days and you can be pretty sure if you’re sorely lacking in any particular nutrient.

Last up is the fat issue.

When you switch to a vegan diet, the biggest thing that changes is protein.

Other than a few foods like seitan or tofu, most of the best vegan protein sources are legumes or nuts.

Legumes have a lot of carbohydrates in addition to protein, while nuts have a ton of fat.

If you’re eating a lot of nuts and nut butters, it can definitely cause some stomach issues and cramps. This should be a pretty obvious issue to spot compared to the others.

Again, Cronometer or some other food tracker can help you identify any areas of your diet that stand out.

A healthy vegan diet is not likely to be the cause of any cramps.

It’s possible to be deficient in potassium or magnesium if you mainly eat vegan junk food, but a well rounded vegan diet with whole foods will prevent most deficiencies.

If you’re getting stomach cramps and digestive issues in particular, it’s likely caused by having too much fat in one meal (or overall on a regular basis). This often happens when new vegans start eating a ton of nuts, which are very high in fat and calories.

In conclusion, no, you’re not more likely to get cramps (leg or otherwise) on a vegan diet.

In fact, you’re probably less likely since vegan whole foods are loaded with minerals, but that has not been studied or proven yet (just my speculation).

If you have constant body aches, go see a doctor, because there’s likely something serious going on that needs to be checked out. A cramp here and there is pretty normal, but shouldn’t be a constant thing for most people.