Meat withdrawal is what can happen when you stop eating meat, although it varies from person to person.

When you’ve depended on something for most (if not all) of your life, and suddenly take it away, there are going to be consequences.

In the case of meat withdrawal, there are both potential benefits and negative side effects from suddenly going off meat.

I’ll give you an overview of both the good and the bad in this post.

What is Meat Withdrawal?

When you suddenly stop eating meat it causes a large change in your gut microbiome, which leads to meat withdrawal symptoms like headaches, sleeping problems, irritability, and more. Meat withdrawal lasts from a few days to a few weeks in most cases.

Negative Side Effects of Not Eating Meat 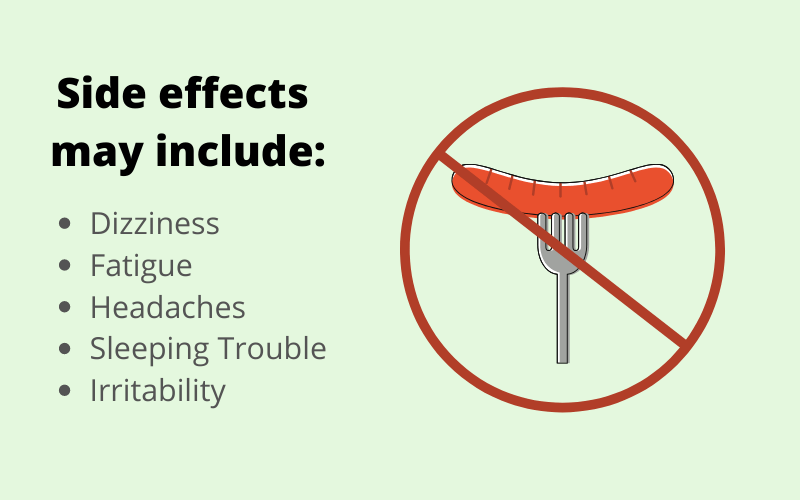 In the long run, there are no negative side effects of not eating meat, as long as you take a vegan vitamin B12 supplement.

B12 is the only nutrient in meat that isn’t commonly found in plants (unless you eat algae or dirty produce).

However, there are some potential short term negative side effects if you suddenly stop eating meat.

I’ve divided those side effects into 2 main categories: psychological and physiological.

Psychological Side Effects of Not Eating Meat

The first side effect that many experience are meat cravings.

To make things worse, not eating something you’re used to might make you uncomfortable (“what do I eat instead?”), which can cause stress and anxiety.

Those make cravings even worse and it’s a self-repeating cycle.

I’ve written a full guide to vegan meat cravings and what to do about them.

When you stop eating meat, there’s a good chance that you will experience meat cravings.

There are a variety of minor, but annoying possible meat withdrawal symptoms:

Meat withdrawal can cause some real physical side effects that aren’t just in your head.

A B12 deficiency isn’t a concern since you likely have stores for at least a few months (if not years).

However, what is a concern is experiencing a Jarisch–Herxheimer reaction.

Here’s what a Herxheimer reaction consists of in simple terms:

Note that this doesn’t happen right away. It takes days or weeks for a large portion of meat-eating bacteria to die. During this time you may experience the flu-like symptoms listed above.

While I’m just speculating, a reaction is probably more likely if you ate a diet heavy in red meat. White meat is more “plain” and easier to digest in general.

How Common Are Negative Side Effects of Not Eating Meat?

Symptoms don’t occur in everyone that stops eating meat. It depends on the amount of meat you ate before, resiliency of your body, and other factors.

For me, I had zero side effects, even though I went vegan cold turkey in the middle of a semi-professional soccer season. However, I didn’t eat a lot of meat before, and when I did it was usually white meat like chicken breast.

If you had a severe reaction (not common) you would need to see a doctor.

Otherwise, an anti-inflammatory like aspirin or ibuprofen should get you through any symptoms.

Not many people will experience the sort of reaction we went over above, but it is a possibility.

Most people won’t have a physical reaction when they stop eating meat. However, if you were a heavy meat eater, symptoms like headaches and fatigue are possible during this withdrawal period.

The most common benefits that people report after they stop eating meat (or go vegan) are:

In the last few years, dozens of professional athletes have gone vegan across multiple sports (mostly the NFL and NBA).

These are some of the biggest, strongest athletes, and they often experience significant inflammation due to their size and sport demands.

So it means something when almost all of them have had nothing but positive things to say about their meat-free diet in terms of health effects.

SB Nation has a great collection of stories from these athletes, but let me highlight a few quotes from NBA players.

Cutting out dairy and the swelling went down and I went full fledge on it and I feel great.

Next, here’s what Kyrie Irving said:

So my energy is up, my body feels amazing. Just understanding what the diet is like for me and what’s beneficial for me for having the highest energy out here and being able to sustain it at a very high level

And finally, a quote from Damian Lillard:

I feel much better. I thought it was all hype. I thought people just said it just because it was a healthier food but I can feel it. I can definitely feel it.”

If you’ve struggled with issues like sluggishness or inflammation in the past, you might actually feel better shortly after giving up meat. This may happen right away, or after an initial transition period (i.e. you’ll feel worse before you feel better).

How Long Does it Take to “Detox” From Meat?

I hate the term detox just because it’s often surrounded by pseudoscience, but yes, there will be an adjustment period.

I can’t give you a great answer here, because there doesn’t seem to be any research about this specific topic.

What we can say from the research, is that it likely takes somewhere from a few days to a few weeks for bacteria to start to die off.

Here’s a quote from a researcher who looked at the growth of new bacteria when new food is introduced.

Within days we saw not just a variation in the abundance of different kinds of bacteria, but in the kinds of genes they were expressing.

Your gut reacts quickly to introducing new foods, but is probably a bit slower to discard unused bacteria.

Thinking about it logically, people often don’t eat a specific food for days or weeks, so it makes sense to try and keep around bacteria for those foods for a while, even if unused.

Again, no conclusive research behind that, just common sense, so it could be way off.

There’s no research-backed answer to how long meat withdrawal symptoms will take to pass. From common sense and what I’ve read from others, it usually takes anywhere from a few days to a few weeks depending on factors like prior meat consumption and personality.

Side Effects of Eating Meat After Being Vegan

Assuming the vast majority of your gut bacteria that can break down meat are gone (we’re talking months or years later), suddenly eating meat can give you issues.

When you first go vegan and start eating foods like beans that you’re not used to in fairly large amounts, it’s hard to digest. It causes bloating, gas, and other stomach issues.

Same goes for reintroducing meat. If you suddenly had a lot of it, you’ll have some big stomach issues. However, if you only had a small amount, it likely wouldn’t be too bad.

If you suddenly eat a significant amount of meat after not eating any meat for a while, it can cause you to get sick because your gut bacteria that is needed for processing meat is largely gone.

Meat withdrawal is a real thing that can cause both mental and physical side effects that mainly include cravings and flu-like symptoms.

However, once you’re through meat withdrawal, it’s fairly common to have more energy and less inflammation.

It likely takes weeks or months to fully adjust to a meat-free diet, and if you ever re-introduce meat to your diet, you should do it slowly.

Can You Die From Not Eating Meat?

This is a common question that I see.

The short answer is that you can be extremely healthy if you don’t eat meat, but you need to plan your diet.

Above all else, the most important nutrient that people get from meat is vitamin B12.

Vitamin B12 is crucial to nervous system function in many ways, and is difficult to get from plant foods. It’s a long story, but you can read more about vegan vitamin B12 sources here.

Getting a supplement is a good idea if you’ve gone entirely plant-based, and you should get your blood levels checked regularly by your doctor.